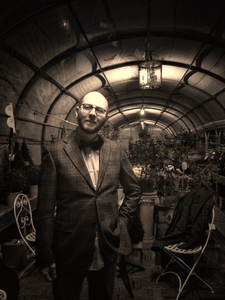 I was born and raised in northern Italy, in the year 1971.
Different passions grew in me but tightly bound together, to cross and sustain themselves like the tendrils of a plant. To separate one from the other is impossible, as well as thinking they don’t draw from the same root.
Music. I’ve got a diploma and I teach guitar.
Photography. A diploma in Industrial Photography in 1998. One of my recurrent themes is the urban estrangement.
Writing. I published “La quinta felicità” (Stampa Alternativa 2009) a book about the deep contact with mental illness during my civil service at the ex Psychiatric Hospital in Trieste.
Art (after years of incubation, observation and selection): at the beginning it was just figures on a sketch book, then watercolour works and now, well, now that communication, provocation, breaking of clichees is apparently more important than beauty and that it’s a unrewindable process, and understanding I’m a passenger on a road opened by others, where findings and inventions are getting less and less frequent, I try at least to produce works that transmit an open resonance, a search of beauty if not beauty itself, to anybody who is travelling in the same frequency. In fact, I take a board, I tape it, then I cut stripes or circles, pull them away, fill the cuts with chalk or wax, brush some oil paint, cover the thing with silicone or epoxy resin, and eventually look at it. And I look until I see.