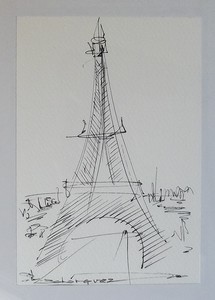 Jaime was born in 1965 in Colombia in Cartegena de Indias, one of the most beautiful city in the Caraibs.
At a fairly young age, he was attracted to drawing and painting and chose to sign his works by his own name Bohórquez in tribute to his mother.
Jaime is lucky enough to have in his family one of the greatest artist of Cartagena Francisco Molina who provided him precious advice.
In Venezuela he attended the Rafael Torreal school where he took training in the art of drawing and learnt all the techniques of painting by copying the Masters' masterpieces. There he became aware of his passion for figurative art, portraits and the drawing of animals.
Diamond cutting, his other passion, lead him to travel around Venezuela. He discovered the marvellous sceneries of Gran Sabana and Salto Angel where nature at its pure state is lush, exhuberant and people are extraordinarily beautiful.
Jaime is always in search for the value of human nature, peace messages and serenity. Religion is also part of his philosophy.
He now lives in France. His curiosity for men,women and nature is still vivid.
He is greatly interested in drawing, charcoal, graphite, Chinese ink, watercolour, acrylic, oils and is constantly in search of progress.