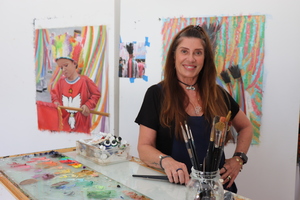 Monica was born in Belo Horizonte, Brazil, where she graduated with a Bachelor of Arts in Public Relations. She worked in public relations field for about two years before moving to Peru, and later to the United States. Living in Miami, she became a Professional Personal Trainer for twelve years. Although neither was her ultimate passion, both professions gave her great insight into peoples' physical and verbal expressions. This insight shaped how she saw her surrounds and herself, and became the source of her expression as an artist.
Monica's passion for the arts started when she was a child, soaking in the life-lessons distilled by those who were to become her role models. Her grandmother, mother, and aunt, were not only art lovers but also dedicated painters. Her years living in Brazil, and Peru - two very culturally rich countries - further influenced her artistic perspective. Despite having roots in her childhood, it was not until six years ago that Monica endeavored to immerse herself in art, enrolling in an art history program for docent guides at the Lowe Museum at the University of Miami. Then, in 2009, she followed this long-time passion by opening her own art studio. Her commitment drove her to obtain her Master Degree of Fine Arts in Painting, in 2016 from Academy of Art University in San Francisco.
Monica Mendes is an award-winning artist who regularly participates in many exhibitions, fairs and art saloons around the world.

Through a series of 30 paintings, “Favelas” depicts Morro do Papagaio in Belo Horizonte, Brazil. More importantly, Favelas is a social and political statement about Brazil and the Brazilian people. The dripping paint seen on the canvas represents the pain and sorrow Brazilians are currently enduring, as we face the biggest ethical scandal to plague the country in our lifetimes. At the same time, through scenes of their day-to-day lives, Favelas also captures the heart, spirit, and resiliance of the Brazilian people. Through Favelas, I hope to bring awareness and spread love by humanizing the Brazilian struggle. After all, life does not give up, and neither should we.