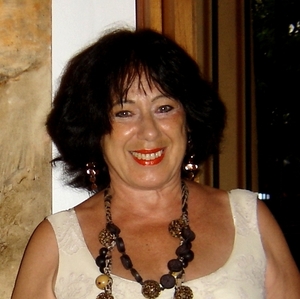 Born in 1949. She lives, paints and dreams in Buenos Aires .Argentina.

Her first experiences with the arts were upon taking classes from argentine teachers (Febo Marti) in 1985. She hasn’t stopped since then. She lived in Spain for 3 years (1986-1989) where she learned: drawing and different painting techniques. She continuously keeps improving her skills; she has done different specialization courses. During two years she was part of the “Tea” group in Buenos Aires. (1999- 2000).

She was admitted in many municipal, national and private contests where she won 49 awards. She has appeared in 31 solo exhibitions in Argentina.

Sara Diciero’s artwork has a creative originality. Since 1999, Diciero has been experimenting with the idea of lighting the artwork from behind. She paints on resin sheets to create the support of her "luminous" boxes or backlights, which she then exhibits in groups as installations. She also makes Digital Art.

Diciero ilustrated .in 2005 the poetry book "Estuario: remotas estancias” by Reyna Armendáriz González writer, from Chihuahua-Mexico and ilustrared "Yace partido el puente de la niebla" in 2014. In 2013 "Todo lo que has de olvidar" by wirter Chilean Cecilia Conejeros and she also illustrated a book for children. Sara was one of staff of the art magazine "5artes" for which she also wrote notes.

Nowadays, her artworks can be found in private international collections in countries such as Argentina, Brazil, Chile, Croacia, Mexico, Spain, Peru, Puerto Rico and U.S.A. and figure in many artbooks, art magazines, CDs, websites and publications about Contemporary Art.

Many critical of art have expressed opinion highlighting her artworks. She served as jury in some art competitions. University and secondary schools prepared some works on the paintings of Diciero.

Her painting is part of Abstract Expressionism; image tends toward nature and conveys strong emotions.
She captures images from a point so far from Earth, another point on the earth as usual, so infinitesimal as close as observed under a microscope.
In this way, you can see in her paintings from microorganisms to mountains, plowed fields, large trees, volcanoes, forest fires, remote villages, and coasts, rivers. And of course land of fantasy landscapes.

Sara works the oil diluted with own inventive visual textures that puts on the canvas in each new proposal for enhancing the work, with intense color, energy and passion that invite the imagination to travel to places undreamed.

Her philosophy: "The light, joy, optimism, hope, dreams, colors and music are my guide, my way, your way, that if you want we can share together ... looking at my artworks! "

Oil paintings were made during 2008 and were exhibits at Centro Cultural del Sur in Buenos Aires during September of 2008.