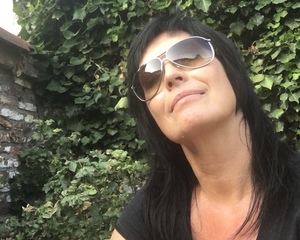 Christel uses oil painting on canvas to present us her lyric expressionism visions. She is a self-taught artist, based in Mechelen, Belgium. She has had a career as an executive producer in television before she discovered art as a way of expressing herself.

The island of Crete remains her major source of inspiration, along with her travel experiences. Christel has lived in Crete during the 90s and she still spends a lot of time there.

Her emotions are expressed through the language of bold colors, with laconic, solid composition and delicate texture mainly on large canvasses. Every painting is a story.

Soon after starting out in 2017 she has had several exhibitions in Belgium. Lately Christel had the opportunity to present her work in Lisbon, Amsterdam, London, Venice, Madrid and Zurich.

“The day Mr. Keller just rolled his eyes at us”