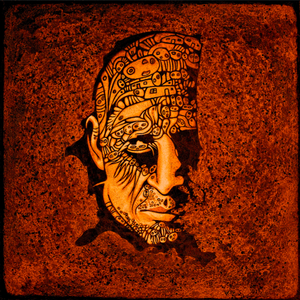 Born in 1971 in Cotacachi, Ecuador, Pablo has been exhibiting his work for the past twelve years in Paris, Barcelona, Madrid, Washington DC, New York, Columbia and various cities of Ecuador. He studied at the Art Institute in Paris and at the College of Plastic Arts In Ecuador under Daniel Reyes. He won the 1994 ¨Paris Prize¨ (surely the most prestigious for young Ecuadorian artists) and in 1998 was one of ten artists under 40 years of age chosen by a national jury as a finalist to later be part of the monumental, ¨Emergent Artists of Artist Latin American and the Caribbean¨ exhibition, A new generation of Artist, In Paris-France. Then, in 2002 in Barcelona he obtained a mention of honor in the second Biennial International of Painting ¨Vilassar del Mar¨.
In 2004, Pablo was among 25 artist who were selected in a competition and whose works were exposed in a group show ¨Art in a Bottle¨ at the Agora Gallery in Soho, New York. In 2008 his art work was selected in the 31st Small Works Art Competition (the 80 Washington Square East Galleries, NYU). In 2009 he was selected for the show Fusion: American Classics Meet Latin American Art, at the Biggs Museum of American Art in Dover, Delaware (USA). Also that year he was selected for the show: ¨Ecuadorian Contemporary Art¨ at United Nations, New York. Just recently he showed his art at the group exhibition: ¨ Ecuadorian Renaissance¨, Queens Museum of Art, New York and also in the Second Bronx Latin American Art Biennial, New York (USA).

“As a Latin American artist I feel that speaking about our art is like connecting with the fable, the myth, and the constant metamorphosis of this fascinating culture. One that arises as a result of a great encounter that began five centuries ago between the old continent, the Western world, and our millenarian American indigenes. The color, the magic, the exuberant nature, the mysticism, the races and the alternative system of living are some of the examples of the grand accretion of culture, the product of a great fusion between two mega civilizations, in which the magical realism and the visual metaphor become part of a fascinating language of daily lives of towns and cultures. I am part of that language. I have developed my most recent series “Mannequin” with the same language of metaphors and the use of some iconic visual figures present in the magical realistic world, which I touched some years back in my creative process. This concept returns in “Mannequin”, to be updated and fused with the dilemmas of the society within the modern world. An example of these dilemmas is the loss of the essence of what is natural and human in our daily coexistence.
The series reflects my own experience over the last years. I’m a faithful witness to these new realities in which we live and observe that all that appears to be natural has often been previously preconceived. The new way of living seems to make us closer, connect us, but instead we are more and more disconnected and pushed away from what is tangible, real and furthermore natural and human. As a synonym of artificial life, the “Mannequin” series attempts to revive and make us remember the irony of these moments, which have become part of our everyday life. The connecting thread in the series are spaces that look like if they were staged scenes- with cameras, tripods, lamps, monitors and screens with cables unable to connect. The characters in my works are partly extracted from actual fauna and in part from my imagination. Like actors or presenters, they illustrate, narrate and describe the “Mannequin” story. By using humor I intend to deliver a subliminal message to be read through the visual metaphors.”