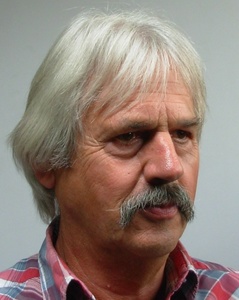 Jan Teunissen, born in 1949, grew up in Zeelst, in the south of The Netherlands under the smoke of Eindhoven. He lives and works in Best, also located in North Brabant. Initially, he followed a technical education and graduated as a business engineer. Until 2002, he did this alongside a job in business, after which he focused on painting. Jan Teunissen is a major autodidact and his work is characterized by a high level of reality and often somewhat mystical, clair-obscurious atmosphere. Still life with images of utensils and food such as bread and fruit. So lifelike, and basically no bigger than in real life, these paintings are such that they evoke comments and have ratings such as: "So real you would take a bite out of it.", "You can smell what fruit it's all about." or "Any moment a worm can crawl out of those pears." Studying many pieces of art from the old masters and experimenting with materials and subjects, gave Jan the ability to make realistic paintings in a responsible and artistic way.
The paintings of Jan Teunissen, beside at the Netherlands, have been exhibited and sold in countries such as Belgium, France, Hong Kong, India, Italy, New Zealand, Taiwan and Qatar.

In my paintings - oil on panel - I strive for a view that is as realistic as possible, mainly still lifes in an atmosphere of claire obscure and no larger than lifelike. I mainly concentrate on details, light and reflections. Images in my paintings often concern obvious objects such as an old vase or shelf and fruit or flowers, the latter mostly from our own garden.

All my paintings are in oil on board

“Plums and branch for Chinese dish”

“Still life with apples and jug with green algae”

Portraits (oil on board)