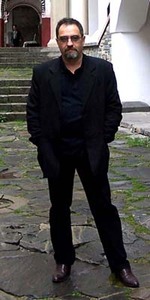 BISER PANAYOTOV was born and continues to live and work in Ruse, Bulgaria. He studied with the famous Ruse artist Kiril Stanchev. His first work was exhibited in a Youth Show in 1988 in Ruse Gallery Borisova 39 and has continued to exhibit consistently since. In 1992 he became a member of the Group of artists in Ruse.

Biser Panayotov's richly imaginative canvasses are filled with delicate but bold shapes and colors. The images evoke organisms, landscapes, and objects with their graceful curves and elaborate detail. The subtle tones of rich red and orange, watery blue and sunlight yellow indicate a fantasy world. His work is mystical, recalling experience rather than intellectually laden and symbolic, leaving the viewers free to compose their own meaning based on sensual interpretation. He concerns himself more with the interaction of different patterns than clearly definable foreground and background to create space and depth in his paintings.