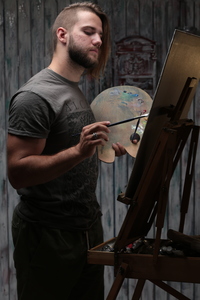 Contemporary Russian-American artist Nikita Budkov was born in Zvenigorod, a suburb of Moscow, Russia on August 16, 1995. As a young boy, he enjoyed reading classic fairytales, science fiction novels, and comics, which all helped shape his imagination and eventually inspired him to express his thoughts through pencil drawings. During his teen years, he became a fan of British and American rock and was later exposed to various genres including metal and electronic music. Budkov says, “Music is an eternal companion on my career journey.”

As a child, Nikita received his training at the Children’s Art School Program in Odintsovo and successfully graduated with honors. He then enrolled in an architectural course at the Moscow Architecture Institute with the goal of becoming a professional architect. However, his life changed greatly after he had an opportunity to come to the United States of America in 2012 as an exchange student. Upon graduating from Cotter High School in Minnesota, where he was crowned Homecoming King, Budkov was awarded an honorable mention in Scholastic Art & Writing from the state of Minnesota. From this point, he was inspired to pursue a career in traditional fine art.

Budkov traveled to Los Angeles to study traditional painting from a different perspective and to master his artistic skills. For three years he studied full time at the Los Angeles Academy of Figurative Art and taught two classes at LAAFA during the summer of his senior year. Budkov graduated with top honors from LAAFA and is now a member of the widely recognized and prestigious California Art Club.

Nikita Budkov’s painting style is based on contemporary realism, and his visual storytelling often includes mythological and ancient symbolic elements.

Artist Statement: “Above all, I appreciate ambient atmosphere, and pursue the mystical and the beautiful qualities of life.”