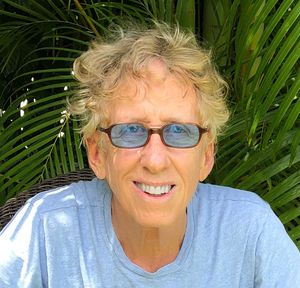 Known for his complex paintings on shaped canvas structures, signature brushwork, and seductive illusionism, Jack Reilly is recognized as an original member of the Abstract illusionism movement, and one of the foremost American painters working in shaped canvas today.

His artistic career began in Los Angeles in 1978, shortly after his paintings were discovered by prominent Los Angeles gallerist Molly Barns. Reilly had just received his MFA from Florida State University and promptly moved to Los Angeles. Following the success of his first solo exhibition with Molly Barnes Gallery, he was invited by Donald Brewer, curator of the Fisher Museum at the University of Southern California, to exhibit in The Reality of Illusion, a major museum exhibition which opened at the Denver Art Museum and subsequently traveled for two years to the Oakland Museum, USC Fisher Museum, Johnson Museum at Cornell, Honolulu Academy of Arts, among other institutions nationwide. This series of museum exhibitions established Reilly as one of the original artists of the Abstract illusionism painting movement. In 1979 Reilly received a National Endowment for the Arts Grant.

By the early 1980s, Reilly's paintings were represented by galleries throughout the U.S. including the Molly Barnes Gallery in Los Angeles, Aaron Berman Gallery in New York, Foster Goldstrom Fine Arts in San Francisco, Marilyn Butler gallery in Scottsdale, Virginia Miller gallery in Miami, and numerous others. Articles and reviews on Reilly's paintings were subsequently published in Arts Magazine, Art Week, the Los Angeles Times, New York Artworld, and in books including American Art Now by noted author and art critic Edward Lucie-Smith, and Inside the L.A. Artist by Marva Marrow.

Such notable collectors of the era, including Fred and Marcia Weisman, Steve Martin, Daniel Melnick, numerous others, as well as public institutions acquired Reilly’s paintings. In 1990 he was commissioned by the County of San Diego to execute a major forty-foot, site-specific piece for the public art program. The following year he was commissioned to create an eighteen-foot, shaped-canvas painting for American Airlines at Los Angeles International Airport. In 2012 Reilly’s paintings were exhibited with Bleicher Gallery in Los Angeles as part of the Getty’s Pacific Standard Time initiative: Art in L.A. 1945-1980. In 2016 Reilly’s was the subject of a solo retrospective exhibition at the California Museum of Art Thousand Oaks (CMATO). Represented by bG Gallery, Santa Monica, CA, Reilly remains a prolific painter, widely collected and exhibited internationally. Numerous private, public and corporate collections that have acquired Reilly’s work include the Oakland California Museum, Atlantic Richfield, American Airlines, and Verizon Communications, among others. In addition to Reilly's long-standing career as an exhibiting painter and university professor, he currently divides his time living and working in Hawaii and California.

“Modern Painting: The Conversion of St. Paul (A collaboration with Caravaggio)”

“Angle View: Modern Painting: The Conversion of St. Paul (a collaboration with Caravaggio)”

“The Ecstasy of Saint Sanchez”

“The Wisdom of Dionysus”

“Eros and the Girl”