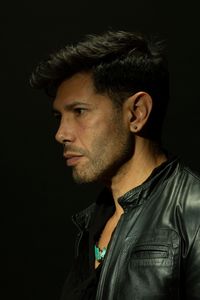 Ariel Vargassal was born into a richly mixed culture Mexican family. These cultural singularities introduced Ariel to undeniable senses of style. He always leaned towards the arts and when he did not mold small clay sculptures, he turned to countless drawings in his notebook.
Therefore, it was logical that Ariel followed a Bachelor of Fine Arts at the University of Mexico. In studying the works of the great artist who preceded him, his passion ignited and his determination proved unstoppable. Upon graduation, Ariel became one of the youngest teachers to teach art at a high school at Mexico City.

His first international exhibition was in Salt Lake City, Utah during the Winter Olympic Games as a host of the city, representing the visual arts of Mexico. After this exhibition, Ariel received invitations to showcase his work in area galleries as well as offers elsewhere in the US, so he decided to move to Los Angeles. Now Vargassal’s work has been seen in various digital and printed publications, books and television programs. In addition, he has been fortunate to work with young Hollywood stars as his models and clients.

Apart from Mexico, Salt Lake City and Los Angeles, Ariel has showed his work in Arizona, San Francisco, D.C., Maryland, Philadelphia and New York. He is a member of the Los Angeles Art Association, one of the oldest and most prestigious art associations on the West Coast. His artwork has been showcased  at the most important Art Fairs is the Country.

In 2017  Ariel was named best Artist in Los Ángeles, and was chosen to represent California in SCOPE Miami. In ART BASEL week “Artisan Series” an sponsored venue by Bombay Sapphire, among more than 8,000 artist, Ariel was named number 2, Positioning Vargassal as one of the best new names in the Art World in NorthAmerica.

Ariel’s career has been growing at consistent speed, not only becoming an influential Artist for his now recognize style, but also being on demand at the Galleries representing him. Art curators like to work with him, and Art connoisseurs are noticing his presence. He has gain multiple galleries representation around the Country and Mexico, and he is constantly invited to participe and create Solo exhibitions at different Art Venues