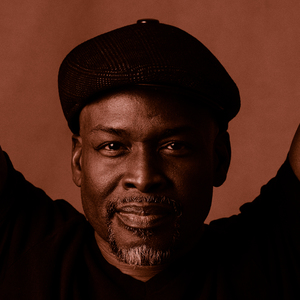 Larry “Poncho” Brown, is a native of Baltimore, MD. He started his first business at the age of 17 as a signwriter and he has been a full time artist ever since. Poncho received his Bachelors of Fine Arts degree in graphic design and photography from the Maryland Institute College of Art, Baltimore, MD. His art, both fine and commercial, has been published nationally in Upscale, Ebony, Ebony Man, Essence, and Jet magazines. His art is featured in the UCLA Fowler Museum of Cultural History book entitled “Wrapped In Pride” and “Connecting People With Art”. His popular works have been prominently featured on several TV shows including “A Different World”, “In The House”, “The Wire”, “The Carmichael Show”, “Star”, and “Greenleaf”. Movies featuring his art include “Avalon”, “He Said, She Said”, and “Soulfood”. His work adorns the walls of the likes of Camille Cosby, Dick Gregory, Anita Baker, Susan Taylor, Ed Gordon and Bernard Bronner just to name a few. His original works are in the corporate and institutional collections of Coppin State University, the Charles H. Wright Museum of African American History, the District of Columbia Superior Courts, the Children’s Hospital of Richmond at Virginia Commonwealth University, Howard University Hospital, and Yale New Haven Health Park Avenue Medical Center.

His earlier works were predominately airbrush illustrations. He evolved from a graffiti artist in his earlier years, to a classically trained sign painter and graphic artist. Poncho’s early published works in the mid 80’s like his “Black is Black” Series was the first to address the subject of colorism in the African American art realm. He was one of many artists often referenced as “The Popular Artists” who gained national recognition during “The Cosby Show” era, and found commercial success between 1985-2000 during a period known as “The Golden Age of African American Art”, by making their art accessible to the masses through direct participation in community art and cultural festivals, foregoing the traditional artist arrangement of artist representation, gallery representation, and art publisher distribution. At the height of this era his works were sold in 3000 galleries across the country, and on the walls of nearly 500,000 homes.

In pursuing his philanthropic goals, he founded Raising The Arts which has created over 70 images to assist non-profit organizations and African American Organizations with fundraising for the past two decades. He also co-founded the Creative Quarantine which is a collaboration with other professional artists that dedicate the entire month of January to creating new experimental works.

Admirers often site rhythm, movement, and unity, as favorite elements in his work. He primarily works in acrylic, although he uses a variety of mediums and styles to express his interests in Afrocentric themes, Ancient Egyptology and dance. Poncho’s unique style combines past and present art stylizations to create a sense of realism, mysticism, and beauty, which gives his art universal appeal.

“My creations are a reflection of my personal values and pay homage to ongoing themes of unity, family, and spirituality”-Larry Poncho Brown

“A Man Of Vision”

“After The Storm I”

“After The Storm II”

“What About My Heart”

“Gimme Back My Heart”

“Always Reading Between The Lines”