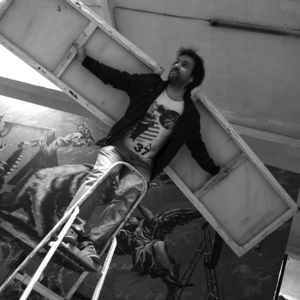 | 2009/2010 – Masters degree in Education in Visual Arts at Psychology and Education Sciences University of Porto.
Thesis name: Writing on the back of the leaves.

| 2006/2009 – Masters degree in Practices and Theories of Drawing at Fine Arts University of Porto.
Thesis name: Laughter and Violence in the artistic practices of drawing.

| 2006/2007 – Specialization in Practices and Theory of Drawing at Fine Arts University of Porto.

The individual as paradox

Mário Vitória’s exuberant images attach to his prodigious imagination which allows him to create the most extensive narratives on a single canvas, with eminent dominion of metaphor, always bordering on the critic of the Human theatre.

This artist’s work is, thus, of an admirable depth, exhibiting complementarity by merging opposite forces, as if our origin is inevitably both Good and Evil.

Notwithstanding that Mário’s references range from Disney to Alfred Hitchcock, placing ingenuity, melancholy, aggression and even the grotesque in the same scene, always resulting in a clear violence of existence, as if existence, by definition, is dependent or born out of violence.

The irony in how this is assumed is accentuated on the present exhibit, above all on the canvas of dead nature being invaded by recognizable shapes from the childhood imaginary, mixing classic features with deep pop culture, between what might be immediately understood as a relationship between art and non-art, or minor art.

The direct citation that the artist makes of these cartoon characters gains a fundamental stress, since it is from them that preconceived notions of what a painting (of what is art?) are destroyed, treated as a contamination of the canvas from the unprepared quotidian of childhood.

This intermission of such figures on the canvas is the sarcastic mean which Mário found to denunciate the decline of good will, as if a disgraceful fate was hopeless, as if disgracing was the following prerogative of contemporary society and as if these values were already forced upon us by infancy games and plays, through that world of toys and images which detained us so lengthy and innocently in the tender years of our lives.

In conclusion, everything lives in conflict, in a state of fundamental crisis which evokes all and all defends, under penalty of perishing in such an ephemeral participation in life.?Everything survives – ironic condition of being alive, survival -, like in a game where the body, the character, the quirk, the misfortune, or any other premise can rebel itself against our own viability or the viability of our intents, to hamper or impede us in our tracks.

Before Mário Vitória’s canvas all things in the world, and all stories, can be found, through his amazing capacity to leave clues without leaving them too clear in the open, without ever removing the possibility of the viewer to create as well, which is the same as saying that he leaves enough room for each and everyone of us to identify with till exhaustion, as it happens with great works, obviously.

“Only if the wars were like a battle of flowers”

“The real one would be who run away from everything else”

“In search of a new speech at sunset”

“The system considering the energy of the body”

“The fishermen of surinimi imagining the portuguese belief”