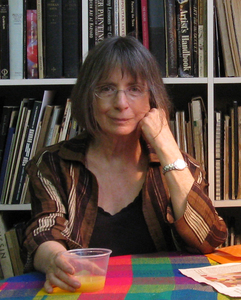 Elinore Schnurr is a figurative painter of the urban environment. After earning a BFA degree from the Cleveland Institute of Art, and spending six months studying the great masters of painting and sculpture in the museums, churches and galleries in Europe, Elinore moved to New York City.

Schnurr painted an extensive series of people inside the World Trade Center towers, then constructed a series of people in interior spaces. The next series used street reflections and were juxtaposed with people in the interiors in a collage-like way. These were extensive and overlapping and are still my continuing body of work.

During all these years, Schnur was exhibiting them in group exhibitions, such as the annual “National Midyear Exhibition” at the Butler Institute of American Art (intermittently from 1975-2004, winning the 2nd Place Award in 2002); in bi-annual Juried Exhibitions at the National Academy of Design (1986 – 1990, and awarded the Thomas B. Clarke Award in 1986); Schnurr was included in many museum exhibitions over the years. Schnurr also had solo exhibition at many public venues, such as the Edward Hopper House Art Center in Nyack, NY (2015); and the New Canaan Library (2014).

Her gallery representations included the Atlanta Art Gallery in Atlanta, GA; DFN Gallery in SOHO, NYC; Capricorn Galleries in Bethesda, MD; among others.

Since 1990, Schnurr has mostly pursued clients and sold paintings as an independent contractor. She has placed paintings in museum collections, such as the Smithsonian Museum of American Art and the Cleveland Museum, to name a few, also several hundred in corporate collections and many more in notable private collections.

For many years Schnurr concentrated on portraiture, travelling broadly, doing commissioned portraits for families and individuals all over the United States.

And quite recently, Schnurr did major, commissioned paintings for lobbies of residential towers: TF Cornerstone in Long Island City and Forest City Ratner in Brooklyn; and a large painting of the LIC waterfront for a construction company in Long Island City.