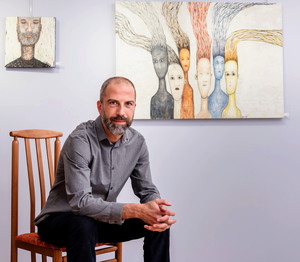 Ventzislav Dikov was born in 1979 in Sofia, Bulgaria in a family of musicians. He has been
drawing and painting since early age. Preferring to preserve his unique style and approach towards art,
he chosed to study music and graduated the National Academy of Music “Pancho Vladiguerov” in
Sofia and later the “ Hochschule für Musik” in Münster, Germany as a classical guitar player.
Since 2003 Ventzislav Dikov has been equally active both in the fields of music and art. He has had
over thirty solo exhibitions in Bulgaria and abroad (Tokyo, Paris, Berlin, Cologne, Barcelona,
Luxembourg, etc.) Dikov has participated in many group exhibitions (Germany, Turkey, Serbia,
Slovenia, etc.) His paintings are property of private collections all over the world.

I am a Bulgarian self-taught artist, my main creative medium is oil painting. I work both in figurative and abstract style. Human conditions and the subconscious are my main field of exploration.
The connection between a person and an object runs just as deep as the connection between two people, or deeper . There is no language involved, only the essence of human being in the world - sensing and reflecting. An object does not need to be useful or of immediately recognizable purpose to gain the affection of an observer, quite on the contrary - the lack of clarity of use triggers curiosity. Curiosity creates a connection.
I explore that moment when the mind is free to let the body create, allowing the objects of unclear purpose, inhabiting the subconscious, come to the forefront.
In a quasi-rational world, paintings themselves are objects of unclear purpose, up until the moment when the moment when they connect with someone.
I have had more than 30 solo - exhibitions in Sofia, Berlin, Tokyo, Paris, Barcelona, Luxembourg, Ankara, etc.
Being a musician too, often in my exhibitions I explore the integration of sound and vision.

These are few examples of my latest artworks.
For more please visit my website:

“The Wind In Our Hair”