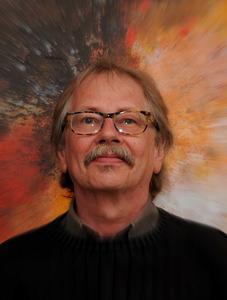 Dutch artist Bart van Oijen lives and works in Wedde. He is the grandson of the late Wouter IJdo, an artist from Hoorn, the man who taught him in his early childhood the first tricks of the trade. Wouter IJdo (1887 - 1965), in turn, was taught by the famous Viennese painter Carl Fahringer (1874-1952).

In the period 1970 - 1975 Bart van Oijen was educated at the Academy of Fine Arts in Arnhem. After his academic training he worked initially on an illustrative, often magical way. Mostly figurative and clearly recognizable. Besides fairytale scenes he was involved with 'fast' animal drawings.
Van Oijen's realistic work gradually changed; his paintings became more and more abstract, i.e. he started alienating reality, or even saying goodbye to that reality, just by using colour and shape.
Currently he is mainly concerned with brightly-coloured abstract lyrical works. His techniques include mainly acrylics on canvas and mixed media on canvas and paper. Now and then, however, he makes a temporarily switch to his old love: animal drawings, a never ending love.

In his abstract work Mother Nature can often be seen as a pictorial starting-point, but during the working-process she can disappear more or less. Van Oijen uses only a few brushes, he has clearly found his own techniques, while he ignores conventional practices, and without any problem rags and his fingers are used to achieve the desired result. The aim of the artist is to create something beautiful in form and colour. He is looking for the absolute beauty. He knows that this will always remain a goal, and that is what is always fascinating. Making journeys to Malta, Crete, Scotland and Ireland impressed the artist absolutely.

The recent work of Bart van Oijen is characterized by the warmth of Malta, and by the silence and unspoilt beauty of the Scottish Highlands.
After moving to the north-east countryside of Holland's province Groningen a change of colour occurred.
Bart van Oijen exhibited widely in the Netherlands. Also in Belgium, Scotland, Portugal and Germany.
Bart van Oijen is not only a painter; he is also a photographer whose pictures were published in several magazines and books. Also he is an illustrator.
His work is in stock at Galerie des Beaux Arts in Heeze, Galerie Sous-Terre in Lithoijen and Amerfoort Art Gallery in Amersfoort. Recently he joined the CBK Groningen.
Bart van Oijen is member of the Colectivo Cillero, an international artist society.
"If you look around you you see that everything is coloured" (K. Schippers)
"Let the artist be silent, let his work speak" (Bart van Oijen)
"With my best brushes I made my worst painting" (Bart van Oijen)

“This is not a snake”