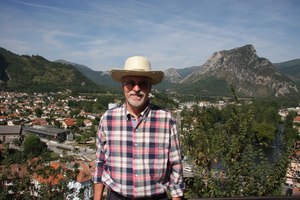 James was born in Omaha, Nebraska in 1958 and took a keen interest in drawing at an early age. He was inspired to draw by his father and began painting in oil by the age of 16.
James Wolford is primarily a landscape painter but also drawn to architectural and marine subjects. After graduating from The Kansas City Art Institute in 1981, James attended Boston University where he was offered a scholarship and graduate teaching assistantship while working on his MFA.
In 1984 James moved from the East Coast to Colorado to pursue his desire to paint scenes of the modern West. In 1991, his innovative use of color was recognized by an award from the Colorado Federation for the Arts. In 1996, he relocated to the coast of Maine, which has traditionally drawn artists to its rocky shores and historical villages. His work is featured on the cover of The Art of Monhegan Island, published in 2004. James now resides in the Boston area, which provides him with wide range of subject matter. He also continues to paint scenes from the West.
James refers to himself as a contemporary realist, partly to differentiate himself from photorealism. His work is included in many public and private collections throughout the country and has been displayed internationally by the US State Department.
Though James is primarily a studio painter and he does paint en plein air, often reworking those paintings in the studio or using them as studies for larger work. Capturing the subtleties and intensities of light is essential to James’ work as a contemporary realist: Many of his paintings are awash in the ephemeral light that exists for only a short period of time in the morning or late afternoon. His paintings evoke a strong sense of place. James often takes subjects considered mundane and transforms them by finding and pointing out their inherent beauty.