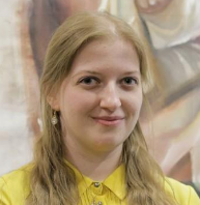 My name is Szabrina Maharita. I was born in Transcarpathia (Ukraine) in 1989. I graduated as a painter in Hungary at the faculty of Fine Arts and Painting of Karoly Eszterhazy College.I also graduated as a graphic designer, and in my free time I am working as a comic book colorist.

Selection of my artworks for sale

In this album you can find a small selection of my artworks for sale, typically each represents a style or theme. I have almost 200 artworks, but they are not listed here. If you want to learn more about my art please contact me.

This series is called VICA. All pieces in this series are closely linked, forming a unit in style as well as in form. Its subject is the harmony between body, drapery, and movement. I wanted to paint a series where the model gives the impression that she strips or dresses up, but the essence was not laid in nudity or sensuality. Therefore I painted poses that are not usual, and only some suggestive parts can be directly seen of the body, which is otherwise made visible by the carefully painted clothes. In the paintings I combined plasticity with flatness. I wanted to give them an unfinished appearence, in order to let the compositions breath. I left the background almost completely unpainted because the focus was on the model, the motion, the folds of the drapery. An important specificity of the series is that I used spare cloth scraps which were basically prepared by myself nailed to the wall. Later, when the canvas dries, this tensioned shape remains, making the composition more interesting. The painting’s harshness is in harmony with the presentation mode. So the canvas is not stretched to a frame simply nailed or hanged on the wall.

This series represent the most actual topic of our century. The main subject is the computer and our relation with it. It is part of our everyday life, we are depending on it, does not matter if we use it for pleasure of work. I depicted people with their computers in their untouched private atmosphere which makes the pictures honest and real. I want them to be looked at 100 years later like we look at the impressionists’ bathing women now. Reflection of an era on canvas

This project was inspired by my visit to Auschwitz; yes the death camp. What I've seen was terrible and it really affected me emotionally. I wanted to represent to people what I saw there and how cruel humans can be. On this picture I painted the big pile of shoes which belonged to the murdered prisoners.

In this series I painted naked human bodies in different positions. The speciality in it that the body parts are devided by the white area which could be a white blanket sheet. This sheet makes an interesting visual experience where we see only pieces of the body on the canvas. It is a minimalistic yet complex composition.

While I was traveling I often took pictures of the port of Haydarpasa, Istanbul, and many other ports. i liked the cranes, shipping containers, old ships. I decided to make a series about these things.