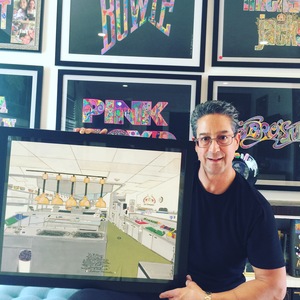 Carlos Gutierrez is a San Francisco native. He spent several years in Seattle and later returned to San Francisco as a young adult and began a long career in the culinary world working in five-star restaurants, hotels, and catering companies.

Carlos has been painting for decades. He works with several different mediums, including watercolors and acrylic, and in styles such as pointillism and abstract, using colors and patterns in audacious and unique ways. His paintings depict scenes from his hometown of San Francisco and other places he’s traveled. He has created miniature memory boxes for individuals he admires that tell their special story.

Carlos has created collections of paintings representing different genres in music. His Music Series is a collection of Rock-n-Roll and R & B tribute paintings, which honor his favorite bands and artists. These pieces weave high-intensity color and patterns with soulful and memorable songs and lyrics.

Carlos’s most recent and ambitious project is called the Six Degrees Series. This series comprises 6 ft. x 5 ft. canvas panels containing at least 300-400 unique names of artists, actors, musicians, leaders, and writers of our time that inspire and move us. True to Carlos’s aesthetic and form—the names are painted in bold, vibrant colors and patterns, interlaced with details about each person’s life and legacy.

Carlos exhibited his artwork at Art Basel 2019 as part of the Red Dot Exhibition.

Carlos lives in Miami, is married, and has three daughters and a son.

Carlos continues to produce art pieces that delight, inspire, and intrigue us.

You are invited to take a closer look!

The Six Degrees series features people and their lives from all over the world and from all different time periods that inspire and move us.