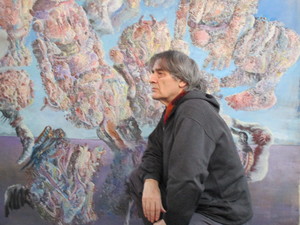 Zoran Žugić was born in 1950 in Belgrade. He completed his elementary and secondary education in Zemun, and attended Šumatovačka school for a while, where he started drawing, using models, and engaged in sculpturing. Upon completion of secondary education he went to Paris, first as a tourist, visiting museums and galleries, and then in 1975 he settled down and enrolled at "Beaux-Arts" Art Academy. In Paris he became familiar with the world art scene. Although he knew what he had always held inside, he indulged in experimentation: Art gestuelle (Jackson Pollock, Willem De Kooning) who were close to him, as well as "Cobra" group (Karel Appel, Pierre Alechinsky, Asger Jorn), while his sensibility was also close to Art-Brut (Jean Dubuffet). Searching for total freedom he turned to himself and his inner being.
Since then, his work has been going in that direction. Zoran’s paintings are filled with strange, mineral, vegetal beings and accumulation of organic matter, suggesting collapse of civilization and transformation of the planet. In fact, it is chaos controlled by imagination and intuition. Zoran manages to create images of gentle colors and alluring atmosphere out of dramatic

After exhaustive research we have come to the startling conclusion that there is no way to explain how the work of Zoran Zugic could have come into existence. His masterful technique and virtuosi would indicate a mature wisdom and educated understanding of the physical world and how it is represented in art, and all that is certainly in play here. So, how then would an accomplished self-realized artist, much less a human being, concoct images of such dizzying incomprehensibility as to shock and baffle a viewer that has made a life’s work out of suspending disbelief?

“ROOM WITH A WIEW”

“LOOKING INTO THE FUTURE”