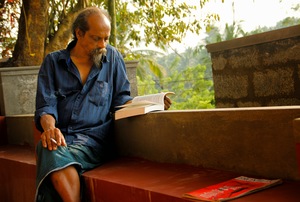 K Prabhakaran (1949-2020) lived in Calicut, Kerala.
He studied B.A. Economics and History from Malabar Christian College (1972-1975) and in Trivandrum Fine Arts College from 1976 to 1978. He completed his post diploma from MSU Baroda (1979- 1985). In 1987, along with a group of artists formed an artist’s collective “Indian Radical Painters and Sculptors Association” and organized three major exhibitions in Baroda (1987), Calicut (1989) and Thrissur (1990). His first exhibition was the “Two Men” show at Gallery 7 Bombay along with Ajay Desai in 1985. In 1987, he participated in three major exhibitions in Baroda, Calicut and Thrissur between 1985 and 1990, organized by Indian Radical Painters and Sculptors Association.
He participated in the exhibition titled “Alekhya Darshan” along with seven other painters and sculptors from India at Centre de Art Contemparain, Palais Wilson, Geneva. In 1993, he did a solo exhibition of paintings, drawings and graphics at Nandan Art Gallery, Santiniketan, West Bengal. In 1994, he did a solo exhibition of paintings and drawings titled “Faith in the Age of Disbelief “ curated by Anshuman Das Gupta, faculty of Fine Arts, Baroda, Gujarat. In 1999 he was part of the “Creative Process” a major exhibition of contemporary Indian artists curated by Shivaji K Panikkar at Guild Art Gallery, Bombay.
During 2001 to 2007, organized fourteen shows in Kerala, titled “The Great Procession”, in various district headquarters of Kerala along with Kabita Mukhopadhyay, alimony of Kalabhavana, Santiniketan Visva Bharati, West Bengal. He also participated in “the Kochi- Muziris Biennale”, India’s first Biennale of International contemporary art in 2012.
Along with the 1995, Senior fellowship for in the field of Visual Arts for the period of 2 years, from HRD Ministry of Culture, Govt. of India and the 2000 Kerala State Award for painting, he was awarded the Kerala Lalithakala Akademy Fellowship for the year 2014-2015 in recognition of his unique artistic vision and consistent devotion to excellence in Visual Art.