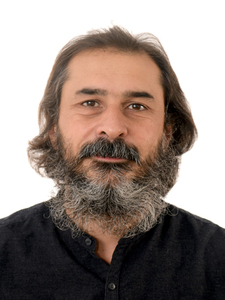 Costin Brǎteanu is joining together naturalism, decorative painting, geometry and the abstract. His operating range is best defined through the “post” prefix. In fact, it is about a process of a meta-postmodernist origin. Besides, for Brǎteanu is more fitting the visual artist term than that of a painter, meaning that his system of applied aesthetic thought entails the deconstruction and reconfiguration of images. The mysteries of cromatics and perspective are mastered by the artist, in whose work prevails, let’s say, the matrix side of reality, before the objective-realistic one. Preoccupied by the transfering techniques of the visual system from unconventional palettes, may it be knives, antimacassars or various other surfaces, on the support of the final works, Costin Brǎteanu proves, without having set himself to do this, a particular sense of rhythm. The game of frequency depths of the colors that he relates together bring up the harmonic potential of some works having a personal nature, and moreover, original ones. Thus, the canvas suggested by him are somewhat musical, the artist takes on the role of the DJ.

The Poetics of Light

The Poetics of Light

Costin Brăteanu is offering the audience, through art work, a special kind of the painting discourse, technique, poetics. He covers through color compositions that are structured in a light way, by using the scholarly chosen counterpoint between space and matter, between solid and dissolute.
The thematic series are oscillating between full and empty, opening an ample creative territory situated in the proximity of the landscape symbolism. Fields overwhelmed by the unperceivable presence of the painting fluid, on the search for the sublime balance between heaven and earth, crepuscular horizons, light garlands which slightly hit the vegetal meat, coagulating in the polychrome horse ride, filled with forgotten symbols, the shadows of the suave becoming, the circular arc up in the sky during the storm evoke a bold, trepidating and also unrepeatable aerated conceptual construct. Costin has proved to be through each cycle of the painting artwork to be the absolute creator of the personal credo, escaping daringly into the suave trance of the comtemplative metaphysics. His artwork, through each painting, thus becomes a portal window towards the magnificent territories of the imaginary, an infinite heavenly kaleidoscope, situated beyond the horizon, beyond the sky, in the elysean fields, where the color becomes light.
A mature artist, a painter whose technique is slightly touching, in addition to the landscape, the syncretic compositions, he modulates a vast palimpsest which adds to the collage the relief paste technique, the combinatorics of the frottage, fully making use of the heritage of the tradition of Romanian embroidery, going through in appropiate dosage the archetypal geometry of the embroidered traditional shirt, sheepskin coat, he is building an art discourse in which the compositions are articulating in a compact manner, and the visionary architecture is making room for floating through an engrossing catharhic abandonment. Costin Brăteanu has become through his presence as an artist a remarkable voice in the city on Bega who is gathering to himself through his own creative reverberation visionary ease, inviting for the festive excursus on the wings of the dream burg.
Thus behold us around an epiphenomenon which still has to say a lot in the national and international millieu, inciting, provoking and enthusiastic, polarizes around it countless exhibitions, colloquiums, series of international camps which fully demonstrate vigorousness, enthusiasm and professionalism.