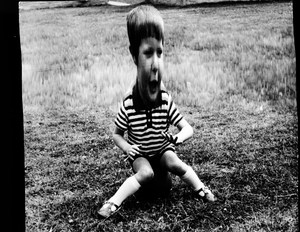 Dark, foreboding caverns constitute the environment in which lie Mark Masters’ idiosyncratic and eccentric creations. His style predominantly draws upon the Expressionist and Cubist movements, although a nuanced inclination towards Neoclassicism is detectable in the heavily atmospheric nature of the works that demonstrate connections with the intense and dramatic skies portrayed by Jacques Louis David and Nicolas Poussin. His thoroughly unique artistic technique, in which he rejects conventional tools and, alternatively, boldly manipulates the oil paint with his fingers and rags, elevates his work due to a pure and primordial control over his medium. This physically direct connection that the artist has with his materials asserts his comprehensive internal thoughts and instantly shares them with the viewer as his spiritual energy is transmitted alacritously from his fingertips to the canvas. Masters’ concise and personal form of expression provokes the inquisitive nature of those who observe his artistic creations as each element of the composition develops a deeper curiosity to identify the implicit symbolism within.
Masters’ indomitable imagination and eloquent expression of his ideals are ubiquitous throughout his paintings and hold further reference to Surrealism with cerebral links to Paul Eluard. His unmitigated talent relentlessly communicates his intellectual perspective through an exquisite and subdued use of chiaroscuro and inherent connection with the world. These elements combine with a myriad of artistic inspirations that culminate in profoundly thought-provoking opuses that are both cognitively and visually engaging.
Considering Masters’ distinctive and individual approach to his compositions, inspiration from Constructivism is abundantly perceptible. Upon close analysis, an influence from artists such as Vladimir Tatlin, Josef Albers and Lyonel Feininger can be detected through their shared use of line and space. Masters often depicts figures trapped inside tightly enclosed surroundings with overbearing backdrops that draw impenetrable comparisons with Francis Bacon, particularly when observing the intensity and depth of colour utilised by these artists to convey the distortion of form. This is exemplified in ‘There Is No Breeze In This House’, which confronts the viewer with a lugubrious juxtaposition between the central figure’s frustrated motions expressing a will to escape motion of the central figure and the oppressively cramped environment that evokes the acute sense of confinement.
There is an undeniably sculptural element to Masters’ paintings that conjures images of the Geometry of Fear sculptors who became prevalent in the aftermath of the Second World War. His mechanical forms resembling coleoptera summon thoughts of Lynn Chadwick; the juxtaposition of delicate wings and harsh, almost metallic, forms and surfaces that often possess carapaces, wings and beaks seem vulnerable albeit simultaneously aggressive. This eerie combination suggests further inspiration from the three-dimensional work of Jean Dubuffet, Karel Appel and Wifredo Lam, particularly when observing the hauntingly anomalous structures and figures that they present.
Each element of Masters’ powerful artworks convey the inner mullings of the artist’s complex and intellectual mind; every aspect contains, at its essence, the details of a mystifying tale which holds allegorical importance to the artist’s subjective viewpoint. Perspicacious values exude from his paintings and suggest intuitive comparisons with Dadaists Hannah Höch and Hans Richter, while his philosophical ideals regarding religion and war seem akin to the Dada movement as a whole. This artistic attitude towards socio-political matters proffers a foreboding message with a compelling moral in reference to the irrevocable nature of humankind. This is increasingly apparent when considering ‘And It All Began With This’ and ‘And It All Began With You’, which solemnly depict a reverent interpretation of Jesus Christ’s crucifixion, which build comparisons both with Graham Sutherland as well as the Baroque and Renaissance styles of art. Masters’ academic decision to reference a universally recognisable iconic image such as this further entrenches his warning to humanity to take heed and avoid repetition of the past.
Masters delves into a limitless pool of artistic inspirations and impeccably developed skills that catalyse his creative proclivities. The academic culmination of sources manifest in his evocative artworks as a dynamic and stimulating incarnation of his resounding internal truths; every attribute of these indelibly communicative works reveals the soul of the artist and fervently conveys his intrinsic message to the enthralled viewer.

a new book by mark masters. now for sale directly from me or available on amazon

pages from the book

pages from the book

In My Darkness: And This My Final Bow Before The Curtain Fails

an original artwork by mark masters
one of the 'In My Darkness' series
oil on canvas
presented in a hand made black stained frame
signed and dated on the front
£550/$734.82 plus postage from UK (Price TBC)
W:20in H:30in

In My Darkness: I Sing 'Berlin' And Then I Put On My Show

an original artwork by mark masters
oil on canvas
signed and dated on the front
presented in a hand made black stained frame
W:16in H:20in
£550/£734.82 plus postage from UK (Price TBC)