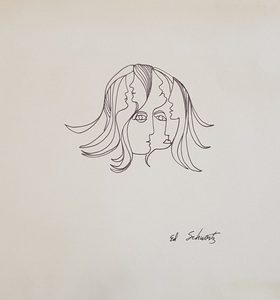 Art, is my way of life. Art is always with me, all around me, and it is rooted deep inside my body, soul, and mind. In my art there is a theme of inherent trauma that resurfaces throughout many of my pieces. For example, “A Jewish Ghetto Child,” is an ink drawing I made, which embodies the plight of those who have suffered during the Holocaust as well as being a testament to courage, strength, and the will to survive. Additionally, my mother grew up in Austria and my father in Germany, and they were both adolescents when the Nazis rose to power. Eventually, my parents managed to escape, but as I was growing up the Holocaust remained a dark and difficult topic of which they did not speak and consequently it haunted me for many years.
Furthermore, when I married, my husband and I settled down in Kfar Blum, a Kibbutz in the Upper Galilee, northern region of Israel, near the border of Lebanon and Syria. I remember being so naïve back then that I told Raz, my eldest child, “When you grow up perhaps you will not have to serve in the army.” Ultimately, all my children were drafted and served in the IDF (Israeli Defense Forces). Moreover, as terror attacks, bombings, wars, and military operations continued to plague the northern borders of Israel, fences began to be erected around the borders and around the Kibbutz where I live.
For example, “The Good Fence,” is an oil on canvas painting I recently completed. This work conveys the missed opportunities, destruction, and loss on both sides of the border. The Good Fence was built in the late 70's in hopes of protecting Israel from the Lebanese Civil War. However, it stood as a witness to the horrors of war from then until today, yet always with hopes for peace. Sadly, the Good Fence is scheduled to be demolished and replaced by an even bigger eyesore—a wall. Therefore, I went to say my goodbyes to the Good Fence and the feelings of desolation that overwhelmed me, I poured out on canvas.
Overall, my work is a combination of visceral reactions, emotional flow, and an insightful thought process. Initially, in the first phase of my process I attempt to capture a moment, a feeling, or I react to a reality near and around me. Then, I let my painting rest and I take a few steps back to think about it again. Later, I return to my work from an intellectual, reflective, and attentive place and I continue working on the piece until I deem it complete.
In continuation, my artwork is a collection of snapshots or stories. My vision is to produce vignettes that strive to evoke emotions and thoughts in hopes that the viewer will connect, internalize reality, and then act in some way to make a difference and change for good. Additionally, my work embraces inclusion, while promoting tolerance. This is because grief and loss will be just as painful and tearful on either side of the border. For example, these sentiments are echoed and expressed in many of my paintings such as: “Palestinian Intifada Mothers,” “Standing Over the Dead,” “The Waiting Tree in the Golan Heights,” “The Grapes of Wrath,” and more. In addition I also have many landscape paintings some of which exude lush beauty and others which convey struggle and hardships.