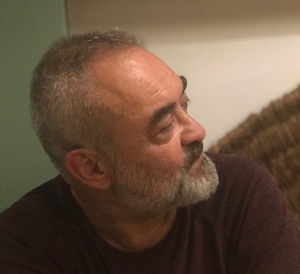 I was born in Istanbul in November 1963. Having an innate interest in drawing I left the high school and started working in advertisement agencies while also accepting commissions for illustrations.
Later on, I finished high school as an external student and I was accepted by the Advertisement Graphics Department of Marmara University Applied Fine Arts Faculty, from which I graduated. I abandoned my post-graduate studies to establish a boutique advertisement agency together with a friend, which continued until about ten years ago. Since then I only did illustration works on commission without direct involvement in advertisement business.
Meanwhile I drew three comic strips. About five years ago I decided to embark on an endeavour to express my thoughts with a philosophical approach in illustrative graphics style, resulting in the present series of paintings.
Now I am İllustrative Painting works on Human and Geometry.

Two Words on My Paintings
As human became acquainted with nature, he realized he was not strong enough for her and he got scared,
He decided to make a unilateral agreement between him and her
He intended first to conquer and control the power that created him in order to feed himself, to mate and to get shelter
He then thought and thought and thought…
He said to himself ”I have to invent a tool that would be valid everywhere yet be
unchanging and persistent so that it would be used by generations”…

Finally he created the tool he wanted.
He materialized the nature with his tool and adorned it with his feelings.
Thus, to whatever he sees or not, whatever he touches or not, whatever he loves or not, fears or not,
shortly, to whatever comes to the mind, the heart, and the eye, …
That is to say, he assigned measure and value to both matter and emotions.
As he himself knows, this was a unilateral agreement,
it did not mean anything for nature, but for him it was important.

He was very happy and his self-esteem was back because the tool that he created was unrivaled in nature,
First he measured the land he walked on, assigned a value to it, then he adapted this tool in the same way to his emotions,
then to the concepts,
and finally
everything was clear in his eyes.
He leaned back and thought,
the tool he created, gave meaning to his world. Now he was knowledgeable, he felt strong
more importantly, he had control over his fears and his future
He was able to look into the future confidently!..
Really?….

The tool he created :GEOMETRY; the value and measurement system he created.
Conclusion: Values turning concrete…

“JOURNEY THROUGH THE SCIENCE”

The method we came up with toquestion the trueness of our values that constitute the meaning of our existence.
135.00 x 135.00 cm.

“THE THREE ROADS TO ARMAGEDDON”