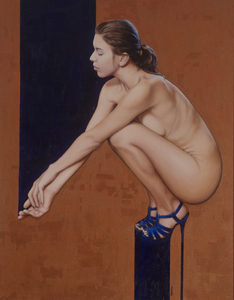 As a gangly, socially awkward youth, growing up in Atlanta, Georgia, Tony Baselici quickly developed an aversion to the ordinary and an affinity for daydreaming. Those traits made him perfectly suited for the visual and performing arts. His mother, who was a wildlife artist, taught him the fundamentals of drawing and painting and encouraged his interest in dance and theater, activities he was involved in through college.

His keen observation skills and aptitude for realism became apparent early in life. He took his first portrait commissions while still in high school. While honing his artistic ability at the University of Georgia, his interest in the visual arts and the natural world coalesced into a degree in scientific illustration.

After graduating, he opted to pursue a far less didactic and more creative career in graphic design, the skills for which he learned to help pay his way through college. Meanwhile, Tony’s daydreaming needed an outlet, so he started painting. For inspiration, he turned to pop culture: fashion photography, music videos and movies. The bold, vivid work of David LaChapelle inspired him to focus on the human figure portrayed in a modern vernacular filled with color, emotion and beauty.

He enjoys mixing almost photorealistic details with complete abstraction or color plane backgrounds amplifying the figure as both a compositional and a narrative element.

Since he entered the fine art arena, he has been accepted in a number of juried and group exhibitions and has won numerous awards including the “Pioneer in Realism” award from the International Guild of Realism. His works hang in private and public collections in the US and Australia. Tony works from his home studio in metro Atlanta where continues his pursuit for a life less ordinary to this very day.