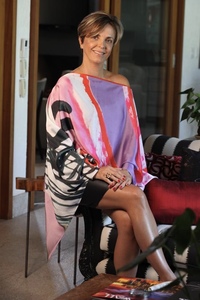 It requires a shake-up of our system of beliefs to break through the crust that confines us within the limits of our own roles. Like an earthquake opens cracks leading to unknown realities beneath the surface, a sudden movement took Patricia Lopes on a journey to pursue meaning and fulfillment through her passion for art. After fifteen years out of the artistic practice, the artist realized that her happiness and completeness were linked to the fulfillment of her creative practice. She made a stop along the way, a change of direction toward the search for what she felt was missing in her. Mutuo Continuo is the narration of that journey: a continuous movement occurring on both the internal and external levels, through geographical places and inner states.
In 2013, Patricia Lopes leaped. Not just figuratively, but geographically. She went to Africa, the motherland, where she started hunting for images whose forms to dissect, detaching them from their attached meanings. Colors, shapes, words: all became particles under the microscope of her gaze. Like a scientist, she dismembered reality to deconstruct the whole into parts and turn them into chaos. Zooming in and out from macro to micro, Lopes realized the essential sameness of all. A closer look into the details, making the pieces lose their original references, made the artist realize that under different skins and shells, we are all the same.
The series Africa was produced from the exhilaration of the direct experience of nature. The risks associated with being among the wildlife, and the beauty of raw life happening before her eyes, inspired the artist to seek what was under the skin of appearances, what made all beings from the same essence. Lopes searched to expand the limits of the canvas, adding transparent layers with acrylics that formed the works like pieces of a wider universe embracing all. Language, the intellectual way of cognition of reality, was reduced to its signs. She turned the written name of the objects into the formal component of their shapes. Through repetition, the words have the double function of being compositional particles, and, like cells containing DNA, they carry the information of the piece in a chain that loses its individual reference but can be decoded by a closer look.
Crosta (Crust) depicts a round circle like the earth with its right side slid off the canvas. The circle is made of the repeated word “crust”, and two squares in the middle, like microscope glass slides, show the substance inside the circle. The inside is turned outside and the slid-off crust makes the exterior a component of the whole.
The relation of opposites has drawn the artist to depict what is visible and what lies invisible underneath appearances. A delicate flower, like the open lily in a pond, has become the subject of the series Victoria, where white open flowers are deconstructed and opposed to sharp geometric forms, alluding to the strength that lies beneath the seemingly fragile flower. Victoria also speaks of a spiritual awakening, a rebirth, commonly depicted as an open lotus flower, the triumph of the heart over the attachment to appearances. These delicate flowers certainly relate to the moment Lopes found in herself a creative rebirth.
A year later, in 2015, like in a feverish dream, the impact that Art Basel Miami made on the artist percolated into a new series called Miami. The intense visual stimulation of the art fair spilled onto the works, dynamic compositions with newspapers, art works, and energetic strokes of paint emulating the exalted state of being part of this event. Lopes brought back leopard and zebra patterns from the Africa series, mixed with images and texts from the art fair as a new wilderness inhabited by wild animals and art. The name of the fair, as a compositional graphic element, flows along the layout of the pieces like a fluid river carrying on its current the names of the animals.
In 2017, the artist explored a tridimensional expression of the multilayered reality we experience, as consumers of a digital era that takes the space of our everyday life. Janelas da Alma (Windows of the Soul) is a series in which Lopes deconstructs a compact composition, limited by the straight lines of the frame, by adding interactive movement with unfolding layers of acrylic. The layers slide off the sides of the work, showing that reality is not limited to its immediate perception, but can be viewed in spatial and open ways. The forms in the compositions turn into floating elements dissolving the apparent limits of the piece into an interrelated system in space. The viewer’s interaction in reshaping the images is a humanizing exercise, decomposing what seems to be solid into a multiplicity of choices.
Mutuo Continuo, the latest series, speaks about impermanence, rotation, infinity and the circle of life. Patricia Lopes has entered into the foundational questions of humankind. Time and the continuous movement that keeps the wheel spinning into countless beginnings and endings are depicted with aural spirals and circles encompassing witnessing eyes from all human races. The composition takes on a new scale of representation, pushing the images toward the limits of the canvas as pieces of the infinite with open ends. The artist is acknowledging the sameness of all regardless of race, gender or origin, in this time of continuous migration where people leave their countries of origin in search of better opportunities. The pupils and irises facing the viewer, as windows of the self, remind us that within the chaos, life happens. That is what moves all journeys, represented here in Patricia Lopes’ personal search.