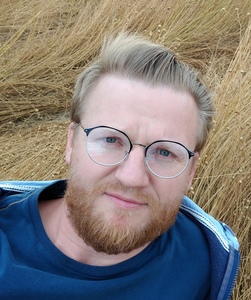 Anatoli Labkouski was born on September 14, 1976 in Baranovichi, Belarus.

After graduating from school, he studied at the Mir Art College (from 1993 to 1995). Then there were years of study at the Belarusian State University of Arts Minsk(from 1995 to 2000). In 2000, he defended the academic degree "Bachelor of Arts". Since 2001, he began his career as a teacher at the Children's Art School in Baranovichi. In 2005, he was appointed director of the school. He was awarded honorary badges in the field of culture "Person of the Year-2009" and "Person of the Year-2017". All this time, he has been working fruitfully not only in the professional field, but also as a creative artist. Since 1994, he has been actively participating in domestic and foreign exhibitions, both group and personal. He exhibits his works in Belarus, Poland, Latvia, Austria, Germany, Luxembourg, and the Netherlands. Today, Anatoli Labkouski's paintings are in galleries, museums and private collections in Germany, Austria, Poland, Denmark, Luxembourg, Belarus, Russia, and the Netherlands.

Chronology of the exhibitions:

Anatoli hasn't uploaded any images yet. Please check back soon!