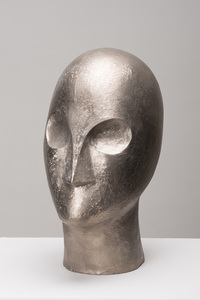 The artist's interest in scuptural tansformation of themes and ideas lies mainly in the field of abstraction.It is not illustration but the ''essence“ (following the tradition of Aristotle) or ''the essential“ (essentia) in Stephanie Schroeter's sculptures that plays a central role. In her work the selected materials evolve ideally to contemporary but timeless forms.

Several stays in Italy nearby Carrara helped her to perfect the handcraft in treating stones and inspired her to transform her chosen material into sculptures that expresses her interest in literature and philosophy.

In 2013 she realized a live-sized sculpture out of concrete in a park in Cologne. The public attention was huge, which enabled her to sell some of her works to art collectors.

She presents her artworks frequently in exhibitions and fairs in Germany, Netherlands, Luxembourg and Italy, has a cooperation with some academies and gives workshops in sculpting in her studios.

The sculptures out of marble, serpentine or steatite are abstract works of art - most of them based on an idea out of the sphere of literature or philosophie.

They based on abstracted figurative characters or human beings.

life-sized sculptures, concrete, 2013, located in a park in Cologne.

Three men seem to wade though heavy ground. Hand in hand they have to overcome resistances - a symbol of solidatity.