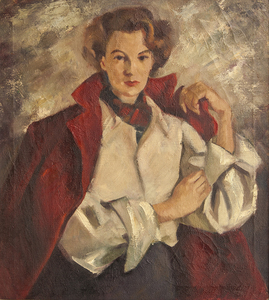 Anne Isabelle McQuire Swartz (Belle) S.C.A., A.O.C.A. (1921-2006) https://artistaims.blogspot.com/
Anne Isabelle McQuire Swartz (Belle), was a prodigious Canadian Artist.
Belle was born in Parry Sound and moved to Montreal as a young girl, where she was inspired by the artists in Montreal including Paul Emile Borduas, Riopelle, and Jean McEwen. Belle studied under the celebrated Scottish artist James McCorkindale at Sir George Williams College in Montreal which became Concordia University in 1941. As an art student at L’Ecole dex Beaux Arts in Montreal she studied wood engraving with Edwin Holgate, known as the ninth member of the Group of Seven. Belle then studied at the Ontario College of Art, in Toronto, in its peak under the direction of celebrated Group of Seven artist Franklin Carmichael who was her teacher and close friend. Belle and her husband Hugh, also an art major at the O.C.A. were greatly influential to Harold Town of the Group of Eleven, who visited their art studio weekly for inspiration. Belle’s desire for knowledge was furthered during 2 years of courses with Dr. Louis Leakey. As well as hosting many solo Toronto Gallery Art Exhibitions and teaching Art at Humber College, Belle was the Vice President of Windsor Art Studios Ltd., a very successful Commercial art company.

Ontario – The white trillium or Trillium grandiflorum was officially adopted as the flower for Ontario in 1937. It was recommended by the Ontario Horticultural Society. The trillium was also used as a national flower emblem for graves of Canadian servicemen overseas after the first world war.
The White Trillium is native to eastern North America. It is most commonly found in mixed forests. The trillium was given its name because all parts of the plant, leaves, veins, petals, and sepals grow in threes. The 4-7 cm long white flowers bloom facing the sun from late April to May, taking on a rosy hue as they mature.

Newfoundland and Labrador- The Purple Pitcher plant or Sarracenia Purpurea was adopted as the official flower in 1954. It was first chosen as a symbol of Newfoundland by Queen Victoria and was engraved on the newly minted Newfoundland penny. It is a carnivorous plant. Flies ants and spiders fall into the pitcher and drown in the collected rainwater. The insects’ nutrients are digested by the plant. Its range includes the Eastern seaboard of the United States and Canada except the territories and British Columbia.