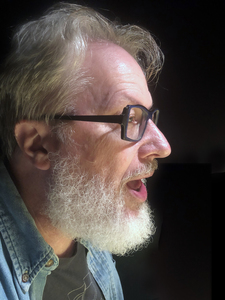 Christopher Paul Brown is known for his exploration of the unconscious through improvisation and the cultivation of serendipity and synchronicity via alchemy. His photography career dates back to 1978 and he has been active in improvised experimental music and motion pictures since 1974. His first photography sale was to the collection of the Standard Oil Company of Indiana (now British Petroleum) and his video You Define Single File was nominated for the Golden Gate Award at the 47th San Francisco International Film Festival in 2004.
In 2020 his work appeared in the following physical exhibitions: Dallas Metro Arts Contemporary exhibition at the Modern Arts National, and The Shape of Things and The Shadow Aspect exhibits at Praxis Photo Arts Center, Minneapolis, MN. Fourteen magazines/journals/catalogs published 41 of his works, including Dek Unu magazine, which featured him in its November issue with 11 works and an interview
Over the past three years his art was exhibited twice in Rome, Italy, in Belgrade, Serbia, and his series of ten photographs, titled Obscure Reveal, were exhibited at a Florida museum in 2017. His work is in a hardcover book recently released by Manifest Gallery and in Tusis, Manipulated Images, a hardcover Dek Unu book from 2019.
He earned a BA in Film from Columbia College Chicago in 1980. Brown was born in Dubuque, Iowa, USA and now resides in Buncombe County, North Carolina, USA.