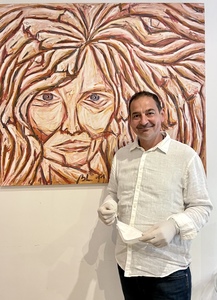 Branimir Lončarević, Brlo, born in 1974. in Zagreb. As an elementary school student he was engaged in photography, folklore.
He attended a painting school at Rokov perivoj. In those years, with the assistance of academic painter Đuro Mlinarac in Workshop of the Croatian National Theater introduced the creation of set design as well as the little secrets of the painting craft. He attends trade school and is dedicated to the family business.

In 2000. he graduated from the author's school of painting Agora in the class of academic painter Ksenija Turčić and as part of his diploma he exhibited on a group exhibition. The first solo exhibition in Ivanić Kloštar was during the promotion of the collection of poems by Brankica Butković "Cross of Life", which was one of the exhibited paintings which became the cover of the book.

Since then, he expresses dreams, ideas, thoughts, challenges with oil on canvas. He exhibited independently in Zagreb and in group exhibitions in Rijeka as a part of the KUD INA-e award for painting expression. In 2001, he create a set design for the live album ‘Hladno pivo’.

2011. begins with acrylic work, and expands its opus in Mobile, rotating and combined images and installations. 2017 adds, in addition to love, also individual processing and work with wood. Each work is a part of the life period, each period is a part woven into the image, tone, color, mood, all of the same times. Like some time from something to someone and then back again to someone else, familiar but again unknown.

Game with growth, growth along the game.