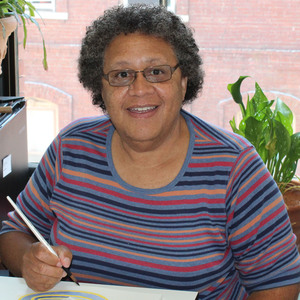 Donna Mitchelson, a native of Jamaica, New York, and began studying art at age six. Her studies include charcoal, watercolor, oils, and ink. She continued her art training at the New York City Highschool of Music and Art. Donna earned both a Bachelor's and a Master's of Fine Art from Pratt Institute as a painting major.

Ms. Mitchelson was a Supervisory Arts Specialist for the U. S. Army in Fulda, Germany. She planned and implemented Art programs for active-duty military, civilians, and their family members. When Donna returned to the U. S., she studied graphic design at Moore College of Art and Design, Philadelphia, PA. She utilized her training as a freelance graphic designer. In 2005, Donna moved to Lowell, MA, and became a member of the Arts League of Lowell. She rented an art studio in the Gates Block Studios. Ms. Mitchelson also studied digital photography at Boston University, Waltham, MA. While she was in school, Donna took documentary railroad restoration photos of the Maine Narrow Gauge Railroad in Portland, ME. After graduation, Ms. Mitchelson started her freelance business, “Whistle Stop Photos,” a suggested business name from her classmates. Years later, she illustrated books for several authors, such as Berry the Bear by J. Mercedes, and changed her business name to “Whistle Stop Photos and Multimedia,” https://www.whistlestopphotos.com.

In 2019, Donna returned to New Jersey and creates from her home studio. Ms. Mitchelson began a series of nature and wildlife drawings from her photos. Later she participated in the 2019 Inktober Challenge. She responded to daily prompts, created a small ink drawing, and posted it to Instagram. At this point, she gravitated towards color ink. After the program, Ms. Mitchelson continued painting a series of color ink drawings based upon her photos. Ms. Mitchelson studied mosaics at the Perkins Center for the Arts, Collingswood NJ, joined the Mosaic Society of Philadelphia and is now a board member, who helped design a 12x60-foot outdoor mosaic mural for the Overbrook Environmental Education Center, Philadelphia PA.

A collection of both color pencil and ink landscape drawings.

307 at White River Junction is an 18x24-inch color ink drawing on watercolor paper.

This is a collection of analog landscape photos in both black and white and color.

“A gazebo at Barnegat”

A gazebo at Barnegat is an 8x12-inch color analog photo taken with a vintage Nikon FA 35mm camera.