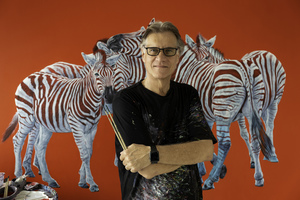 HELMUT KOLLER, Austrian-born artist and photographer, is well known for his colorful, bold and festive paintings of animals, which are collected throughout the world.
After Koller completed his training as a photographer, he became the official photographer for the Vienna State Opera, capturing legends such as Luciano Pavarotti, Placido Domingo, Leonard Bernstein and Rudolf Nureyev.
He has published several books of his work, including “Opera Live,” about the Vienna State Opera.
In the 1980s, Koller came to America and transitioned from photography to painting. Since 1987, Koller has been creating "super-realistic colorful pop" animal paintings.
His paintings are currently exhibited in the United States, Europe, Russia and Asia.
Koller lives and works in Palm Beach, Florida and Vienna, Austria.

KOLLERISM is defined by the realistic representation of the form and the abstraction of colors.