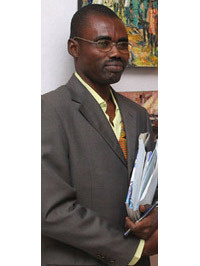 Jonathan "Mavua" Lessor was born on 26 November, 1960 in Warri, Delta State, Nigeria. He had his early education in Warri and higher education at the Auchi Polytechnic, Auchi. In 1986, he graduated with a Higher National Diploma (HND), Upper Credit in Painting and did his National Youth Service at the Federal College of Education in Abeokuta from 1986 - 1987.

Between 1987 and 1993, Lessor engaged himself as a freelance artist. Experimenting with metals and other materials for interior and exterior decorative works. In 1993 he opened his studio and concentrated more on his specialized discipline of painting and for fourteen years, 1993 - 2007, permanently exhibited and marketed his works at the Signature Art Gallery in Lagos, Abuja and London. Lessor built a unique relationship that was cordial and rewarding with this pioneer gallery.

In 1998, Lessor had his first solo exhibition in Lagos - "Consciousness of Form". Well received, he was encouraged to return in 2001 with "Colour Amidst Squalour", an exhibition coordinated by Obias Odogwu. This too was a huge success. In 2005, 2006, 2008 and 2010, he followed up with "Tones of Light", "Art on the Rooftop", "The Stages of Time" and "Bonds Across" respectively.

His most recent exhibition was held in Fort Worth, Texas in the United States of America.