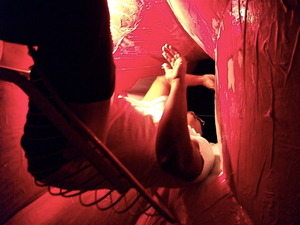 R. Jackson is an internationally exhibiting artist who for the past thirteen years has been creating and curating pop art based on his interests in science fiction, Japanese animation and Hip-Hop. From there, he has been able observe the birth of a unique art movement that has emerged combining the dynamic and interrelated worlds of comics, anime and hip-hop, with the elements of modern cinema called Donu. This movement is defined by an inspired, original approach to existing media that redefines the media itself.

In the spirit of this, he coined this new genre “Donu” in tribute to the famed hip-hop producer J Dilla whose last work, the magnum opus Donuts left an indelible mark on that industry. Donu also makes reference to Katsuhiro Otomo’s masterpiece Domu. Katsuhiro Otomo has not only revolutionized anime in Japan but also redefined animation storytelling in the global entertainment environment.

Jackson is currently working on two bodies of work. The first is DonuPop which pulls the genre of entertainment into the context of pop art. The other body of work is ”Hip Pop Art” where he uses portraits to document Hip Hop’s transition from sub to popular culture.