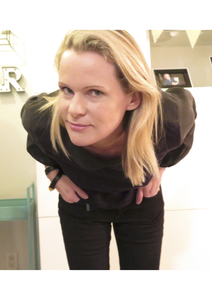 Dr. Georgina Macken is an internationally experienced, award-winning portrait painter and one time art director. Her fascination with portraiture led on to a doctorate in cognitive and developmental psychology at the NSSR New York City. She currently resides in Melbourne, Australia.

As former Art Director of DDB Needham and current a portrait artist, Georgina is heavily involved in autism research and intelligence testing children with ASD. In the past Georgina worked in New York City as a painter, DJ and fashion show producer. She has been painting and illustrating all her life and has had numerous solo and group shows in Sydney, London and New York.

Born in Darlinghurst, Sydney, Georgina’s passion for art and portraiture is inspired by her fascination of the soul which resides within the face and non verbal communication. Outside the studio, Georgina was a world-class orienteering runner and one time Australian Champion. She has two young children, both with autism, and recently returned to Australia to raise them in the country she loves.