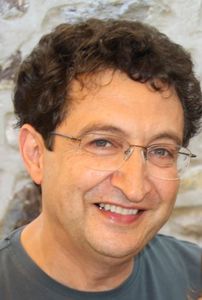 Izak Matatya has been exploring the graphics capabilities of a home computer ever since PC's were around in the early 80's. Being both an artist and an engineer, Izak Matatya was able to dither the only 16 colors available in 1982 on an RGB composite monitor, dividing each pixel into a 6 X 6 matrix and thus obtaining 576 different colors to work with.

Izak Matatya was one of the first artists to use the home computer as an art media, seeing it as the wave of the future. He is a distinguished member of Infographie Canada and has exhibited in numerous events.

Izak Matatya uses his exceptional talents in music, mathematics and software architecture to score color and movement on his computer. Izak Matatya's reputation has spread to Paris, New York, Washington and Rome, where his works are the subjects of books, exhibitions, CD cover pages, live concert visuals and even textile designs on silk. His works have retained the attention of many avant-garde critics all around the world.

Those half mystical and half mathematical iterations are the results of the explorations of the visual possibilities of combined formulas some of them as old as the 17th century.

Walking into one of Izak Matatya's art galleries is like entering the bridge of a spaceship. Past huge windows rush galactic showers of stars. It's a voyage that takes you right into the colorful heart of the Northern Lights on another planet or into a dizzying, endless perspective.