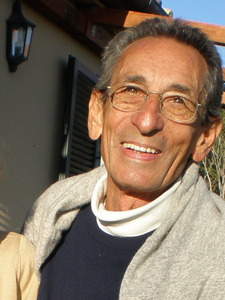 Provided with economist cultural bag with his master degree in economic science and specialization in foreign business Sergio Giardina is also gifted with esthetic feeling and artistic necessities matured in art cities like Florence and Rome. In those cities he attend during 6 years several courses of nude to the Academy of fine arts directed by Prof.Cavalli and Prof. Guzzi. In 1981 he organize “Atelier 13” which is a course of integrated artistic discipline (as design, paintings, sculpture , engraving , ceramics,,)where he is a teacher together with other colleagues of the Academy of fine art in Rome.

From 1983 to 2003 S.G. lives and works in Far East countries and in East Europe as Trade Commissioner where he develop his artistic activity influenced by purity of shapes and by the chromatic simplicity typical of the Japanese art. In these countries he take part in cultural events and exhibit in local Embassies and Galleries of Art.

His artistic growth is influenced by the conviction that source of creative attitude is the unconscious with its wealth of reach experiences accumulated since childhood. The accomplished work must intuitively express feelings and mood trough rhythmic geometric shapes and wise use of colors such as has been introduced first from classic masters and after from the impressionists. Kandinsks says : let your eyes be enchanted by the purely physical effect of shape and color, like a gourmet savoring a delicacy.