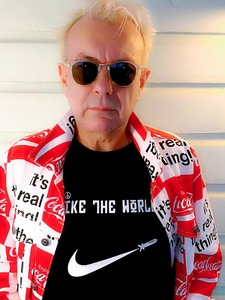 Thomas Dellert-Dellacroix also known as Tommy Dollar, a name given to him by Andy Warhol.
He is a multi-talented artist. Educated as an actor, director and singer turned visual artist, photographer, painter and short filmmaker as well as a singer songwriter and designer.

*> For me being an artist is to walk along the razor sharp shoreline between the sea of annihilation and the inner landscape of hope; to float in the gap between the awareness of our souls and the indifference of our TV screens. To survive the no-man’s land-where art swings between the cruel madness of reality, and the beauty and serenity of our dreams

Thomas Dellert-Dellacroix (born in Stockholm, 1953) has for the last forty years been working with various art forms. He has had more than 100 exhibitions in and around Europe and the United States, and is represented in museums as well as official and private collections all over the world including the Absolut Vodka the Heinz Collection, The Swedish Royal family collection , and the Holocaust Memorial Museum in Washington DC

Throughout the long years of his career, Thomas has been living in many cities including Stockholm, New York, Antigua (West Indies), Stuttgart, Barcelona, Warsaw and most of all in London for 8 years and Paris for 12 years, Berlin for 6 years and two years in Venice. He is currently living and working in Florence, Italy .
.

His visual art spans from painting, collage, junk sculpture, to photography, photomontage, video installation, as well as poetry and music. He has designed costumes and sets for theatre, opera and television, book covers and record sleeves.

His visual language is direct, sometimes even violent, but always with a humanistic approach. Although he feels the need to explore the darker side of mankind, he uses irony and humour as his tools. In this tradition most of his art deals with the history of the 20th century.

Thomas Dellert puts a lot of attention to accuracy and truthfulness in his art works. Tirelessly, for years he has been collecting newspaper clippings with apocalyptic headlines, and fetish memorabilia from the last century to build the backbone of his documentary art form.

He also incorporates sound and video that give direct links to the historical episodes that are depicted in the art works.

During his early years as an artist working and living in New York, he moved in the same circle as Jean Michael Basquiat, and Keith Haring. His friendship with the legendary Pop-artist Andy Warhol gave way to mutual inspiration. Warhol Camouflage works were inspired by Dellert’s early prints. This in exchange resulted in a series of Thomas’ silk-screens, based on the Warhol techniques. Even though some of their work looks similar at first side, though looking closer one realises that Thomas Dellert, who had been brought up in a socially aware Sweden, shared Warhol’s fascination for glamour and beauty, but in a more satirical and critical way he found his own more complexed pop art expression with a social awareness within the content. He actually later inspired Warhol with the camouflage prints Thomas had created in 1979 that later became Warhols own art expression.The same happened with artist Jean Michel Basquiat who visited Dellert's exhibit in New York 1982. All paintings by Dellert were then framed with ropes larger than canvas wood frames. After the exhibit Thomas left all frames on the street outside the art gallery on St Marks Place a street away from the home of Basquiat. He brought them home and this framing technique with larger wood frames than the actual canvas and the canvases being pulled with ropes became his trademark. Many years later Thomas was invited to the Basquiat Retrospective exhibition at the Serpentine Art Gallery in Hyde Park London and then saw his frames on the walls, now with Jean Michel’s art inside them.

In 2001 while living and working in his Utopia London, Thomas met Agnieszka Dellfina that resulted in a passionate artistic and personal relationship, which propelled them into the contemporary art scene.

With Agnieszka at his side Thomas found a new language, a fruitful dialogue and an exciting journey that followed, resulting in a series of artworks spanning from photography, painting, video, live performance, music and poetry, as well as ready-mades and installations. The synonyms Dellfina and Dellacroix spun out of their family name Dellert, and the artistic logo D&D was created to represent their universe. Together they made over 50 International exhibits and 55 Short movies, as well as many music recordings under the name of Dejavu.

In 2009 they decided to go separate ways. They divorced as husband and wife and split apart as the artistic couple they had been for nearly 10 years. Dellfina now works on her own solo career and is back in her home country of Poland.
Since then Thomas has collaborated with the famous photographer Ellen Von Unwerth and for the recent 9 years Thomas has been living and working together with female “Me Too “ artist Vava Venezia.

Thomas hasn't uploaded any images yet. Please check back soon!