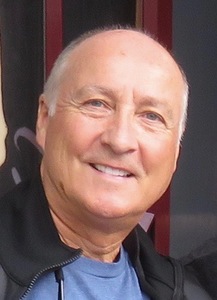 Daniel Hachard is an American artist born in France in the 50s who grew up in Paris influenced by all major art movements, new wave cinema and western classics.
His style is rooted in the art form of popular comics of the 50s and 60s with an illustrative approach of unblended colors that uses the graphic codes of both comics and mid century pop art. Coupled with the aesthetics of that advertising time period he creates a new visual vocabulary and narrative for popular western themes.
After studies in international business and commercial art, he moved to New York in the 70s to work in advertising design where he discovered the art of Roy Lichtenstein and Andy Warhol with whom he later contributed to product design and advertising commercials for Vidal Sassoon Hair products and Halston print advertising.
His unique and fresh contemporary illustrative Pop Art style for western themes has been described as both innovative and captivating.

“Rider on the Storm”