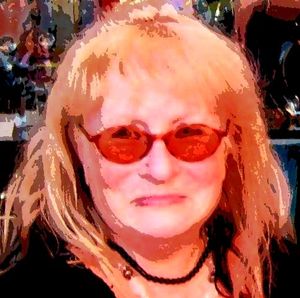 Robyn Stanton Werkhoven was born in Penrith, NSW Australia in 1952.
From the early age of eleven years old when she received a set of oil paints and brushes, Robyn has loved the world of Art.
Commencing her career as a Graphic Designer in Sydney, Australia in the seventies.
Specialising in silk screen designs for clothing and textiles, designing for Sydney clothing boutiques and later opened her own business “Armin Designs” in Wollongong.
Robyn, who created “Studio La Primitive” with artist Eric Werkhoven, has been involved in the visual arts for many years– including: performance/event art, painting, sculpture, jewellery design and management of galleries. Establishing Tighes Hill Gallery, Newcastle, as co-director with Diana Middleby in 2003.

The past twenty years Robyn has lived and worked as a professional artist in the Hunter Valley, participating in over 90 exhibitions, with many galleries exhibiting her work in Newcastle, Melbourne and Sydney. Her work is represented: Netherlands & private collections in Europe.

Portraiture is a keen interest, with celebrities and dignitaries included in her portfolio such as: Michael Winchester actor / film producer, Rhianna Griffith film actress / artist, and Margaret Sivyer OAM and the late Dr. William Bowmore OA, OBE, patrons of the arts, Honourable Mahla Pearlman AO, the late Sir Kenneth Gillespie, international Ballet Dancer short listed for 2006 Portia Geach Award.
Her portrait of Jenny Kee, iconic fashion designer was a Finalist in the Portia Geach Award for Portraiture 2012
Five times portraits have been short listed for the Portia Geach Memorial Award for Portraiture and in 2004 & 2011 has been a guest speaker, S.H. Ervin Gallery, Sydney, to talk about her work and approach to portraiture and painting celebrities.
Robyn was one of nine artists, who painted portraits of local Hunter identities for the National Heritage Trust Project, Maitland, 2006 - 2008.
Since November 2009 Robyn is an exhibiting member with Portrait Artists Australia.

Robyn exhibited works in Portrait Artists Australia “Face of Australia” Exhibition at Sydney Parliament House 2011 and in “The Whole Worlds a Stage” in Melbourne.

In 2012 more exhibitions are planned – Kaleidoscope Gallery Sydney and “A Fine Line Between Pleasure & Pain” at Newcastle Art Space Gallery.

“The development and success of the collaborative drawing and painting with Eric Werkhoven has been a main high light of my artistic career.”
There are future plans for exhibitions in Europe and USA.

Since early childhood I have been fascinated with drawing or painting the human figure, especially the face. This led me to exploring and expressing the dynamic and delicate nuances of the human form and psyche.
My paintings maybe called ‘contemporary figurative’, deploying vivid colour and strong line.
Portraiture is a keen interest, with celebrities and dignitaries included in my portfolio.

“ERIC WERKHOVEN IN HIS OUTDOOR STUDIO”

“SELF PORTRAIT IN STUDIO”