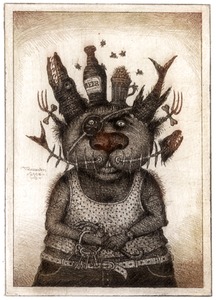 
I was born on the island Sakhalin, in a small town Poronaisk, situated on the coast of the Pacific Ocean. My childhood years passed far away from so-called "civilization" and the only window to the reality that I had were children’s' illustrated books.They became my fairy tale world which, although I have grown up, I do not want to depart with even today. The world of brushes, pencils, watercolors, and miscellaneous bottles with inks and paints, which I endlessly love, have become for me a theatre, where I organize everything in my specific order and create a spectacle to amuse myself. In this theatre I am the director, the actor and the viewer at the same time. www.tyukanov.com

“Sergey Tyukanov. Project for Hotel and Restaurants in Chicago. www.tyukanov.com”

“Sergey Tyukanov. Project for Hotel and Restaurants in Chicago. www.tyukanov.com”