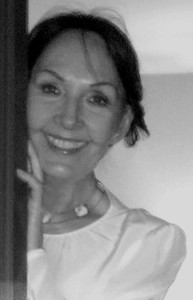 Two passions-that for art and that for literature-have accompanied me from the very beginning. The one for literature led me to my first profession. After having studied philology (German and English literature and language) I became headmaster at a German Gymnasium, responsible for the language and fine art department and teacher for German, English and drama. Teaching children and young grown-ups literature, analytically and creatively, was a great pleasure. I put on stage many theatre plays , especially by Shakespeare and by international playwrights of the 20th century.
Parallely - as an autodidact- I got myself informed about the history of art and continued developping my ability as a painter, experimenting with different materials, colours and techniques which let me find my very own style . This can be described as mainly figurative but often mixed with abstract elements and here and there with a slight surrealistic touch. I have never ever lacked of themes that come to me by the things lived and experienced , and by those imagined, felt. dreamed or thought of. But the scale of themes is not limited to all this for in the realms of mind , spirit, and soul there are no boundaries. My main interest is directed towards man and the mystery he is surrounded by from the very beginning to the very end and beyond that...
Thus painting became my second main profession and since 2001 I have been working as a free-lance artist in my atelier in Dortmund, Germany..
I was born in Gelsenkirchen-Buer, Germany , I'm married and have two children.

Prizes (the latest ones only ) :

There are two quotes by one of my favourite authors, Virginia Woolf, that bring to the point what I think about memory and about life :

" In solitude we give passionate attention to our lives, to our memories, to the details around us ."
" Life is a luminous halo, a semi-transparent envelope surrounding us from the beginning ."

As the creative process - as far as I am concerned- is always more or less subconscious I can't exactly say what the message of each image is. But I'm sure it is circling round the gist of the above quotes . I hope the viewer will find his own interpretation since my images give enough room to decipher an observation. a mystery or a moment of psychological insight.

In this painting one can see:
- part of the statue of opium poppy with poppy capsules in her crown ( created in the 13th century before Christ on Crete) ; in the ancient world opium poppy was estimated as a divine medicine because of its intoxicating quality with the double effect to put people to sleep or to reduce their pain.
- a couple either saying welcome or good bye
- two brains
- an Italian scenery
the message is circling round remembering and forgetting
2012, oil on canvas, 120 x 140 cm

In Sakespearian plays the protagonists often complain : "... alas , I'm fortune's fool" (see i.e. Romeo) which means they make fate / fortune responsible for their evil experiences. In my painting of the old myth of Orpheus and Eurydike the protagonists react in a different way. They also might have said at first : " I am forlorn" but then they reflect and ask themselves : " Alas, why am I lorn ? " And they get the idea with the blindfold. Maybe it will work...

Two sphinxes, a double portrait, pendulum and cristal ball as doors to the subconscious...

There are many different aspects of time: time on the clock, time in the mind, objective -.
, subjective-, mythical time... Maybe this woman has lived already many lives and will go on...

“In a beautiful town”

The golden background in medieval paintings reflected the harmony of the divine world order in which man felt integrated and safe. Nowadays this belief is shattered or has totally vanished. Sometimes people can make out a bit of that gold but only in fragments and splinters.

The shadow arrives first in the beautiful town.

“The unimportance of time on the clock”

People want to eliminate the flow of time in moments of happiness.

For people of high rank of whatever kind life often becomes a burden because of envy and hatred.

At present on the way, between past and future

Triggered by a poem by Ingeborg Bachmann, the Austrian poet, "Nebelland" . The lyrical speaker must realize that his beloved woman even invites the godless crows in her beautiful branches leaving him alone and forsaken in the cold winterwoods and that she changes her surroundings at night going to town to meet other men in the bars...

There are other means than telephone, internet and letters to exchange thoughts and feelings with other people but sender and receiver must share the same wavelength.

Scheherazade, the oriental Princess who saved her life inventing and telling stories for thousand and one night.

During the night man's relationship to his inner world is very close. Some people have much fancy from early childhood on. They are favoured because their world is unlimited.

“The music of life”

To listen carefully to the music of one's life makes it clearer and stronger and points into the direction one has to go.

Something from within blasting through the facade.

The scene after a crime : a torn female torso with a torn dress, the victim. The offender , a black man with a hood running away. Maybe the face on his back is his own face, looking back in sorrow forever. Perhaps the eye looking through a layer of the exfoliating rind is her eye, symbolizing her enduring consciousness after death...
The contents is supported by formal elements: the contrast of decay (torn dress, dissolving body, exfoliating rind ) and of life (a face and an eye) and by the contrast of light and dark colours.

“Song of a broken doll”

“Fly, when the wind is high”

From my series "Spirits of the Rainforest", here: Spirit of hallucigenic plants (2014)

From my series : Spirits of the Rainforest , here: Spirit of a Rivergod lamenting about man disturbing and killing nature (2014)

Time between Reality and Dream