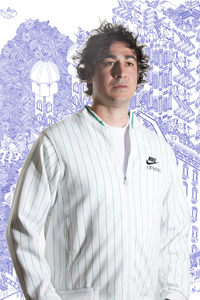 Francesco Casolari was born in Bologna (Italy) in 1982. He started to engrave when he was 6 and his first creation lasted until the age of 12. Right from the outset of his activity, he has focused on urban settings, engraving medieval and Parisian scenes or opera houses. He resumed his activity at 19 and, during his university studies in architecture and fashion design, began to develop his own style: futuristic metropolitan scenes in which he imagines buildings with European architectural features of the past centuries, fast spaceships flying over them and clowns, dames and fictitious characters as inhabitants. He tries to create utopian cities according to steam punk science-fiction theories. He aims at hyper-figurative representations, where fantasy and precision go hand in hand. His latest handmade etchings are 1x1.5 m and it took him 1300 hours of work, covered in several months, to make them. His works have been exhibited among many renowned collections both in Italy and America, and even at institutional level. He has collaborated with fashion companies and architects and, as textile designer, he has labelled accessories, t-shirts and objects. He took part in several exhibitions (museums and art galleries) and international fairs and is mentioned in various art catalogues. His works are shown in a great number of cities all around the world: Paris, Brussels, Berlin, Cologne, Vienna, London, Zurich, Monte Carlo, Balearic Islands, Azores Islands, Thessaloniki, New York, Toronto, Los Angeles, Indianapolis, San Francisco, Miami, Caribbean, Toronto, Bogotà, Santiago del Chile, Buenos Aires, Sao Paulo, Boa Vista, Kathmandu, Tehran, Dubai, Oslo, Shenzen, Singapore, Hong Kong, Tokyo and Osaka. He have done more than 200 exhibitions around the world.

I have been an engraver since I was a child, since I was 6 years old. I immediately specialized in urban scenarios. My etchings are produced and printed entirely by hand and it takes more than 1000 hours to produce them and they are printed by my art Gallery in Milan. I depict cities of the future in hyper-detailed and axonometric elevation