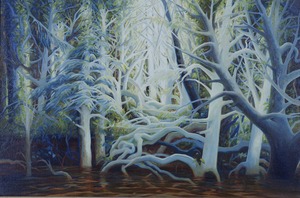 My first New York City exhibit in the late 60’s, was called “Elegy to Nature” and since then I have been painting and drawing the many diverse aspects of the landscape. I am fascinated by our complex love yet exploitation of nature.

I painted and drew the Galapagos Islands as a last “primordial place” over a span of several years, going there twice to work and experience that fascinating site. Another series was of burst ink mural-sized drawings of animals and their environments. In 1973-4, I developed a personal mythology for a woman hero (based on Campbell's Monomyth) which dealt with her ecological commitment to nature. This series of 20 drawings called MYTHMAKER is now in the collection of the National Museum of Women in the Arts in Washington D.C.. and was exhibited there in October through January, 2004-05.
Whenever possible I took trips, drawing and photographing the Grand Canyon, Alaska, as well as parts of Mexico and Africa. Some of these sites became the focus for a series of collages of “nature as Disney-fied scenes”.

During the seventies I had four one-woman shows in New York City at the Lerner-Heller Gallery, received a C.A.P.S. New York state graphics award and exhibited in a number of group and museum shows, proposed and worked on the HERESIES Ecology Issue #13 along with a group of other concerned women (my article on Ecotage appears in this issue). Then in 1980 I was seriously injured in an auto accident, which interrupted my life and work for a number of years and added another dimension to my work.

In 1987 I began a series of Billboard paintings contrasting the beauty of nature with our destruction of it. I searched for beautiful sites as well as the ubiquitous polluted areas--to paint, to photograph and to absorb them.

I am still working on a series called The Industrial Park, depicting the destruction of the landscape and it’s inhabitants. These works were recently shown at the Accola-Griefen Gallery in NYC.

In January I had an exhibition at the Accola /Griefen Gallery in NYC. called Possible Peril. Also this spring I have been included in the Heckscher Museum’s Long Island biennial exhibit.

I plan to continue painting these paradoxical aspects of the landscape in this series as well as in “Overview” a group of 30 panels that are more sculptural since they are composed of dimensional materials such as collage, iridescent pigments glass chips even creatures washed up on the beach.

This Billboard was inspired by a devastated site in New Jersey.
The swamp was polluted and in the distance stood the Statue of Liberty. An ironic comment.

We are devouring our resources as we consume, collect and buy.

This depicts the erosion of our world, not only our natural resources but morally, as well.

This was inspired by a canoe trip throught the Okefenokee Swamp which is surrounded by poverty stricken communities and people.

“Message to the Future”

This is inspired by graffiti that portrays a sense of dispair about the future.

This portrays the industrialization of our world

This is a metaphor on the crowded skies.

This represents the plight of animals in our mechanized world.

I am imagining how the world must look from outer space, criss-crossed with roads and development. I had the road man run his yellow line cart over this painting.