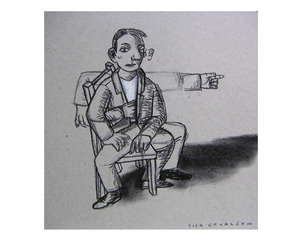 Diek Grobler was born in the Nothern part of South Africa. He obtained his BA Fine Arts degree from the University of Pretoria in 1987 and his Masters Degree in Fine Arts from the University of the Witwatersrand in 1996. He has exhibited professionally since 1988 and his work is included in several major public and corporate collections in South Africa.
Grobler’s art practice covers a variety of media and disciplines. Aside from his fine art practice, he has illustrated several children’s books, and has directed and produced several short animated films. In a career spanning 22 years, Diek Grobler has presented more than 15 solo-exhibitions of his work and has participated extensively in group exhibitions, on national and international level, a.o. the International Olympic Comitee art exhibition, Geneva, Switzerland(2004), as part of the South African Delegation to the Delphic Games, Kutching, Malaysia in 2005, Nine Dragonheads environmental art symposium, Cheong Ju City, South Korea(2004), Group Exhibitions with the Korean Society of Illustrators in Prague and Peking(2002), and the 13th Annual Open Exhibition of the Royal Over-Seas League: Over-Seas House, London and Royal College of Art, Edinburgh(1996).
His animated films has been on the official programme of more than 40 international festivals, and he has received 4 international awards.

Diek Grobler is a storyteller. His work is concerned with the everyday struggle of everyman. Very few of us live epic lives, and thus exploring epic subject matter would be arrogant and pretentious. Grobler explores the little disasters and small miracles which defines our mundane existence.

“man pondering the meaning of "it all"”

“This game used to be so simple, so predictable”

“room at the top”

“The tragic heroine and fate”