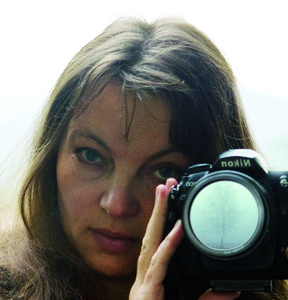 Co-founder and Vice-President of the Foundation Centre
of Photography (since 2004).
One of organizers of FotoArtFestival and its program director.

Co-owner of the Baturo Publishing House (since 1991).
Co-founder and co-curator the Gallery of Photography B&B in Bielsko-Bia?a (since 1992).

Curator of the exhibitions “The Art of Seeing” (Galeria Fotografii B&B, Bielsko-Bia?a, 2003) and of the International photo contest and exhibition "No Borders" (2005).

Her photographs have been published (among others) in: “Playboy”, “Voyage”, “National Geographic”, “Podró?e”, “FOTO”.

Her work and biography are included in: “Masters of Polish Landscape” and in the prestigious “A History of Women Photographers” by Naomi Rosenblum (Abbeville Press, Nowy Jork, USA).

She has translated into Polish "World History of Photography" by Naomi Rosenblum (Abbeville Press / Baturo Publishers 2005).

Specializes in landscape, but she also took photos of children, theatre, fashion.
She takes some documentary, too.

Prizes for the book "The Beskids": - Jantar Book (prize for the most beautiful book of the year), Meetings of Good Book Publishers, Gda?sk, Poland (1995); - Prize in the Contest of the Society of Polish Book Publishers (1995).

Inez Baturo takes photos to give testimony and to let the others get to known the world through “her landscape”, which is often more or less dissolving, graded, delicate and emerging from fairy atmosphere, showing, in a magic way, the state of her soul.

Landscape photography by Inez Baturo is pure, pure and clean. The pictures tell us not of the world we are living in, but merely of a world we would like to live in. The images are passionate, and at the same time ageless. Many of them are simple, clean, pure like a Japanese poem, a Haiku.
Inez Baturo is a traditionalist who lets herself be overwhelmed by the beauty of the Polish mountains. She strips her pictures from colors, she creates depth of the vision by using mountains, trees and a strong light that often is monochromatic. The artist`s sense of beauty is profound and the viewer can feel her exaltation as she lifts her camera to her eye.

„The World of Inez”
She, who invites us to visit her world. She finds Light where earth touches the sky.
The magic of her visual paths turns Light to something unusual, while space is infinite. A walk with her ...

These photos evoke a sense of a deep connection with the natural world. Inez has been able to capture the mystery and wonder of this world we all share and make us feel connected
to it. Her sense of light and space brings these photos to life and makes me want to experience them myself.

Looking at Inez Baturo‘s photographs one feels peace and harmony. On the road from landscape to fine art images we are led by sensitivity of Inez, who gives us reliable guidance.
The landscape found it‘s match in the photographer who‘s soul is reflected in her work.
Looking at the pictures we are daydreaming with her. Her images confirm that instead of questioning theoretically what photography is about nowadays, we should trust the photographs themselves. So let us give ourselves the joy of looking at the Fine Art Landscapes by Inez Baturo.