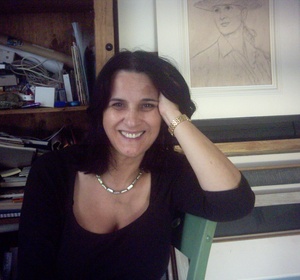 Gloria’s career as an artist began during the late 1970’s when she opened the doors to a small art gallery in Norfolk representing her own and other, carefully selected, artists work.
During this time she also held private art classes for both children and adults, and soon established a loyal following of students.

Since then her work has spanned sculpture, book illustration, stage sets and the design and restoration of lacquered furniture and Chinoiserie, including work for The Fitzwilliam Museum, The Ashmolean Museum and also work on the Wallace Collection.
Animals have featured strongly in her work, including the Iberian horse. Whilst travelling to Portugal to study the Lusitano in his home environment, she pursued her own studies in Haute Ecole’ under the tutelage of Lord Henry Loch. Since then she has gone on to produce the bold and powerful studies of bulls that she has become so well known for.
Inspired greatly by the fighting bulls of Portugal (never the bullring) and the mass and majesty of both English and Portuguese breeds, in these works is demonstrated her mastery of the art of draughtsmanship which is seen throughout her work, from the dramatic charcoal studies of ballet dancers to the relaxed sketches of passers-by.