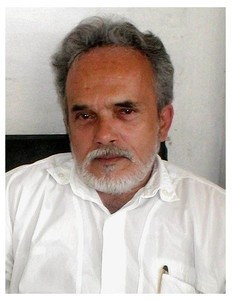 This work called Olympic Spirit, oil on canvas, 100x100 cm, was selected by the Committee and will be participating OCOFA Olympic Fine Arts exhibition of London in 2012, as part of the London Olympics. The exhibition will open on August 1 at the Museum of London, staying until the 7th of that month.
The artist Gilberto Gomes was invited by the Embassy of China in Brazil and selected by the Committee. We selected 500 artists from 80 countries for the exhibition.

“Launching Ceremony of the Olympic and Curators of Fine Arts Show”

The new phase of the artist, aims to recreate expressionism within a connotation more personal and objective.
According to art critic Magno Fernandes dos Reis:
"The dazzling blue frames that awakens us, derives not only from the technical, but the craft and the memory of the past that is reflected.
In the earlier work of Gilberto Gomes realize - if the ethical attitude of the painter, or a way of taking the vocation of an artist from ideal.
Gilberto had the courage to break with the traditional expressionism to try to explain and try to get rid of the twentieth century. "